Flights from the East Coast of the US to western Europe can be deceptively short, especially with favorable winds. What might be a blessing for economy passengers in ever shrinking seats is also a challenge for travelers wishing to sleep.

While most airlines offer flat bed seating in premium classes, even a seven hour flight leaves no more than four hours of shut eye, taking into account take-off, landing, and two meal services. With this in mind, many airlines offer a substantial buffet at their departure lounges, while a handful go as far as providing the option to enjoy a formal sit-down dinner. Passengers may choose to eat at the lounge in order to maximize sleep time on board.

Today Air France announced the introduction of a new pre-flight dining service at their New York JFK lounge, available effective immediately. The so-called “Night service” will be offered in a dedicated private area of the lounge prior to the two late flights to Paris, AF 009 (departing at 9:45 p.m.) and AF 011 (departing at 11:25 p.m.). Guests do not need to reserve the service in advance. With a touch of humor, the airline points out that “Customers with a very healthy appetite can, of course, eat again during the flight.”

What makes the service original is that it the menu in the lounge will match the onboard offering, so fans of Air France’s in-flight French cuisine will be able to enjoy the same fare on the ground – which we speculate that will taste better, too. (Note that specialty meals will not be available at the lounge.) 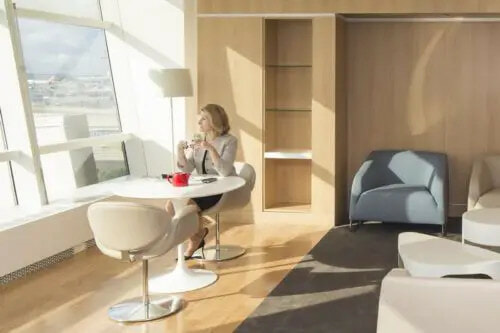 The introduction of pre-flight dining is a welcome addition to Air France’s service, and contributes to the appeal of the newly rejuvenated business class product.

It’s hardly unique, though, especially at New York JFK, which is widely considered as a premium destination. 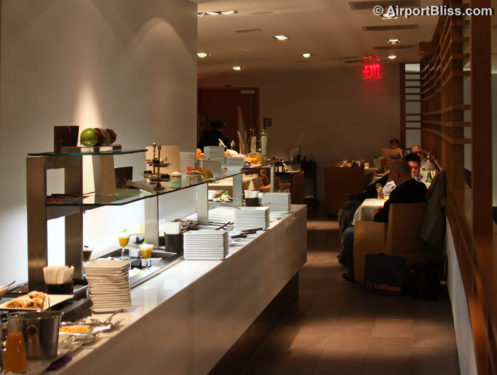 It’s interesting to note that Air France does not offer the service prior to earlier flights – especially those departing around 6 and 7pm, which is very much dinner time in the US. With traffic at its peak during the afternoon commute, passengers are more likely to show up at the airport early for a late afternoon flight than for a night flight, so the availability of the service for earlier flights would be well received, and possibly more valuable.

Despite the improvements at JFK, Air France’s ground services at other East Coast hubs still lag behind the competition. At Washington Dulles airport, British Airways offers full hot meals at the Galleries Lounge as well as a separate Concorde Room, while Lufthansa operates a Business and a Senator lounge with a complete buffet spread. In contrast, Air France runs a pretty basic lounge that doubles as a pay-in facility and seems to be constantly crowded. 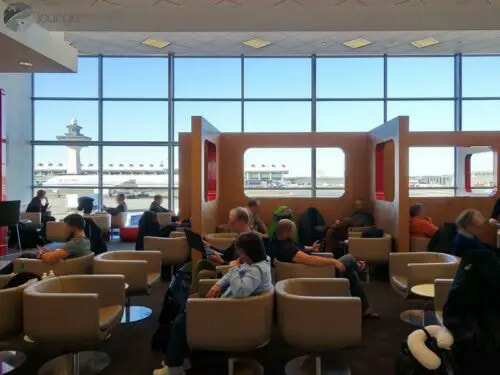 Air France’s new pre-flight dining service at New York JFK is a welcome enhancement to their premium product offering. Yet, it remains to be seen if it makes a significant difference. The availability of the service is relatively limited, and the Air France lounge product in the US is weak overall – the New York JFK lounge is in many regards a flagship that’s vastly superior to the other Air France lounges in San Francisco, Washington Dulles, Chicago, and Houston.

Perhaps worth mentioning is the availability of a convenient Air France Arrivals Lounge at Paris Charles de Gaulle airport. While arrivals lounges often receive little publicity, they’re an important component of the Business and First Class products where available, as they allow passengers to maximize sleep time by skipping breakfast on board, and then enjoy breakfast and a shower upon arrival.