The unveiling of Air France’s new lounge a Paris Charles de Gaulle Terminal 2G this week marks the dawn of a new era for the carrier’s Schengen passengers.

Opened in 2008, Terminal 2G is one of the latest additions to the sprawling Roissy hub. Dedicated to flights within Europe’s Schengen area operated by Air France and SkyTeam partners, the terminal was designed with ease of navigation, efficiency, and accessibility in mind. With modest looks and only 20 gates, the building is a far cry from its more grandiose neighbor, Terminal 2E—which partially collapsed shortly after its inauguration in 2004, then re-opened in 2008—but features streamlined signage, fully accessible facilities, and conveniences such as power outlets in the gate areas.

The original Air France Lounge, however, seemed to be an after-thought. Tucked away in between retail stores, the cramped and sterile space offered seating for a mere 50 customers, a paltry snack selection, and Wi-Fi. Essentials such as bathrooms were missing, only to be found outside in the terminal. 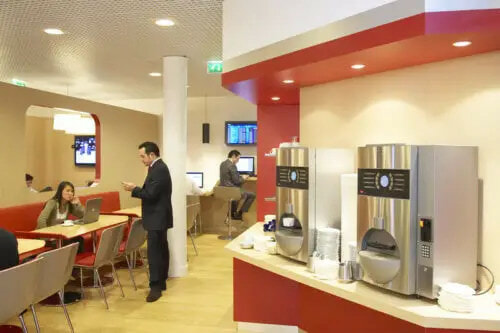 While basic facilities for short-haul flights are hardly unheard of, it should be noted that, according to Air France, 50% of passengers using Terminal 2G are connecting, with possible long layovers. The original lounge was reflecting poorly on the Air France experience.

Opened on March 1, 2017, the new Air France Lounge at Paris Charles de Gaulle Terminal 2G is a complete departure from the original club.

At 7,800 sq. ft. (730 sq. m), the new lounge is five times larger than its predecessor, offering passengers space to stretch out in a more relaxed and welcoming environment. 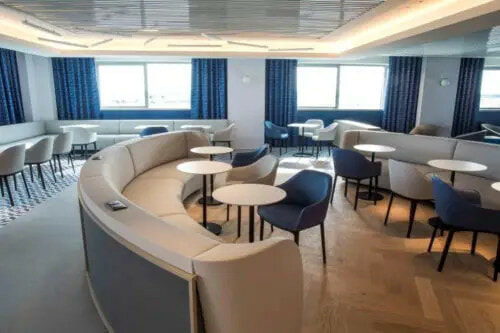 The design of the lounge is inspired by Air France’s flagship club in Terminal E, Hall M—the airport’s newest building. The décor bridges the gap between tradition and modernity, with designer furniture and light fixtures, a palette of light colors, clean lines, and “Haussmann-inspired decoration that adds a final touch of Parisian chic”, such as curtains and hardwood floors.

Seating options include inviting sofas, individual seats, and semi-private workstations. Power outlets are available at every seat, in side consoles or at shoulder level.

The open space layout follows the latest trend in airport lounge design, but the long and curved sofas break out the space and carve out more initiate areas. 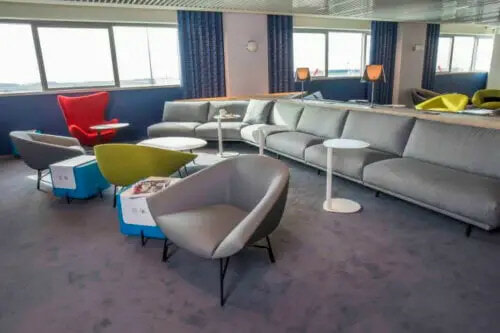 The new lounge boasts an open kitchen, which churns out fresh hot and cold dishes. Plans even call for an on-site bakery, to open in May 2017. The enticing smell of fresh pastries alone might make the lounge an ideal place to relax and socialize, whether on an extended layover or at the start of a short journey. The dining area, called the Brasserie in honor of its French tradition, also offers a selection of snacks for passengers on the go, as well as Illy espresso. 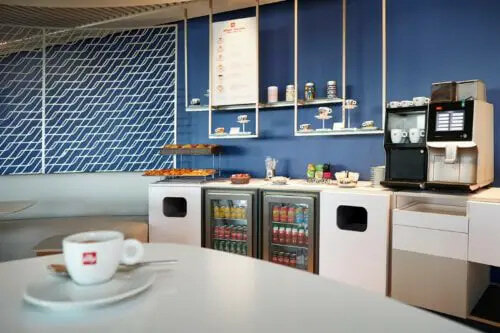 Other drinks include juices and soda. Alcoholic beverages, with the exception of beer, will remain absent at the Schengen lounge.

Another notable improvement is the addition of showers: a luxury for short-haul passengers and a welcome amenity for travelers in transit, who can now skip the Arrivals Lounge in Terminal 2C and enjoy the convenience of a shower right next to their departure gate.

There is no full-size Clarins Spa such as at the Air France Lounge at Hall M, but the carrier promises limited spa services, to be announced shortly.

With the opening of the new Air France Lounge at Paris Charles de Gaulle Terminal 2G, passengers benefit from expanded customer service options, with a focus on automation. The lobby features several self-service kiosks which passengers can use to check in or perform routine inquiries or changes to their travel plans. Additionally, the staff is equipped with tablet computers allowing them to provide assistance in a seamless manner. 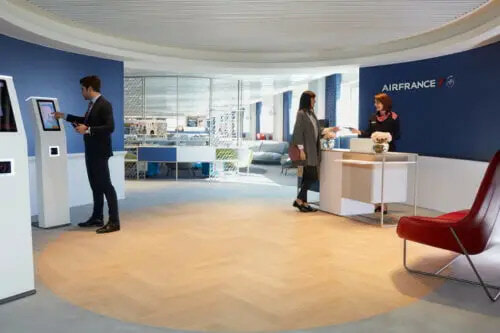 A new focus on the connection experience at Paris CDG

The new Air France Schengen lounge at CDG Terminal 2G opens as part of an effort coordinated by Air France and airport operator Aeroports de Paris to streamline connections at the SkyTeam hub.

Paris Charles de Gaulle is plagued by a poor reputation, with some travelers choosing to avoid the massive and confusing airport in favor of other European hubs, such as Amsterdam and Frankfurt, which are often perceived as more efficient.

The opening of the new Air France Lounge at Terminal 2G is certainly a transformative upgrade. However, structural issues remain: Terminal 2G is a standalone building, only accessible by a shuttle bus from Terminals 2E and 2F. And the ongoing occasional passport checks within the Schengen zone, due to the security situation in Europe, cause unforeseen delays. Yet, we’re impressed with Air France’s renewed focus on the ground experience. It might be time to give CDG a second chance!