American Express has been shaking up the US domestic airport lounge market by opening stunning lounges at major hubs such as Dallas/Ft. Worth (DFW), Las Vegas (LAS), New York LaGuardia (LGA), and most recently San Francisco (SFO.)

The Centurion Lounges offer a premium experience that is more akin to what one would expect from an international First Class lounge than from a typical domestic lounge. Centurion Lounges are visually striking spaces, with a signature living wall, hardwood floors, designer furniture, recessed lighting, and high end finishes. The service is personal and attentive, with personable front desk staff, and servers roaming the room offering drinks and bussing tables. But the amenities steal the show. Each lounge offers full hot meals cooked by celebrity chefs, a full bar with a high-end selection of cocktails, superb shower suites, semi-private spaces such as napping pods and cube chairs, and a family room. At the Dallas location, patrons may enjoy a complimentary massage, while in San Francisco, travelers may indulge in wine tastings. Some are rumored to even occasionally miss their flight, overwhelmed by such luxuries. 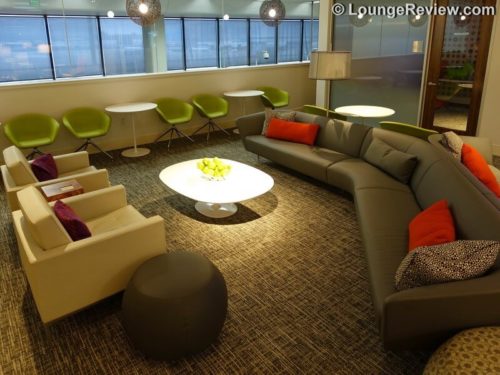 Access is complimentary for American Express Platinum and Centurion card members (the latter may even request higher end Champagne, an undocumented benefit!) plus two guests. All other American Express card members can purchase access for $50, a fee that is easily justifiable considering the list of amenities, and the fact that airline lounges charge virtually the same for day passes for a much more limited offer.

In 2014, American Express announced their plan to open additional locations at Miami and Seattle-Tacoma airports. The Miami location was scheduled to open late 2014, while no date was put forward for Seattle. After a few delays, we’re delighted to report that construction is now well underway, with the Miami location scheduled to open in June 2015, and the Seattle location currently taking shape.

The lounge will be located in the North Terminal, home to American Airlines. According to the Miami Herald, “The 8,000-square-foot Miami space will be ring-shaped, with tarmac views and, in a nod to South Florida’s coastal vibe, a floor-to-ceiling textural wall that resembles a wave.”

Chef Michelle Bernstein will be in charge of cluniary offerings and is promising buttermilk-brined fried chicken, Greek-style local watermelon salad. Still according to the Herald, “She said she leaned toward lighter items, like a green goddess salad and a vanilla panna cotta dessert.” We can’t wait to sample her creations.

Amenities will include a spa with complimentary treatments, similar to the one in Dallas.

According to American Express, finding a large space was challenging at Seattle-Tacoma airport. The company settled for a smaller space, which will be dubbed The Centurion Studio. It will offer “comfortable seating, charging stations, fast and free WiFi, and complimentary healthy snacks and beverages.” Concretely, this means that freshly cooked food will not be available. However, our sleuths have learned that American Express has applied for a liquor license, so wine and cocktails are likely to be offered – so much for the health factor 🙂 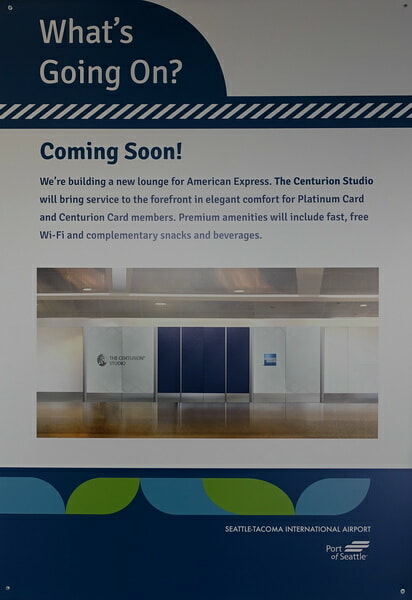 The lounge will be located in Concourse B, by gate B3 (close to the security checkpoint, but at the opposite end of the concourse for passengers using the transit system.) It is scheduled to open late summer 2015, likely in the September timeframe. Opening hours will be 5am to 10pm.

Seattle-Tacoma airport already offers several pay-in lounges, including two new ‘The Club At SEA’ locations, but we expect American Express to offer a vastly superior product, even despite the Studio branding. We’ll have a review out as soon as the lounge opens!