Australia’s Brisbane International Airport is the country’s third-largest facility, serving 21.9 million passengers in 2015, according to statistics from the Bureau of Infrastructure, Transport and Regional Economics.

Brisbane Airport underwent a $45 million facelift that was unveiled in October 2015 as befitting its status as an important hub for international airlines looking to attract premium travelers, said Leonie Vandeven, manager of media and corporate communications for the facility. “The transformation has put Brisbane International on the map as one of the most beautiful terminals in the world, while establishing a global benchmark for design,” she said.

The airport’s redevelopment gave airlines the opportunity to relocate, update, redesign and, in some case, expand their lounge facilities, said Vandeven. “In doing so they could bring their lounges in line with [our] vision of creating a distinct space that differentiated Brisbane Airport from all others by leveraging the unique character of Brisbane, with a specific focus on Queensland’s enviable outdoor lifestyle and creating an environment that encapsulates the personality of Brisbane and Queensland,” she explained.

Airlines embraced this concept and wanted to deliver a new benchmark in premium travel for passengers, said Vandeven. “With travelers’ expectations and needs changing over the years, it was the perfect opportunity for the addition of things like device charging points, different dwell areas (office/eat/chill zones), dedicated kid’s zone (Air New Zealand) and other amenities in the lounges, including Brisbane Airport’s very first day spa, by Plaza Premium,” she said.

The airport determined that the top needs and desires of travelers are a premium lounge experience and quality food, wine and coffee, said Vandeven. “We do not consider Brisbane Airport to be just a gateway. It is a destination experience in itself, and having premium lounge options is an important part of that for all passengers, not just those aligned with specific airlines,” she said.

Singapore Airlines officially opened its upgraded SilverKris Lounge on June 7, 2016, said spokesman Karl Schubert. “We had it open for about a fortnight before that so we could have a soft opening,” he said.

When Brisbane Airport decided to do its renovations, it opened a new section for lounges, said Schubert. “Planning on the new lounge began last fall, with construction starting after Christmas,” he said.

Singapore Airlines had an older lounge at Brisbane, said Schubert. “We’ve been redeveloping SilverKris Lounges around the world under our new home-away-from-home concept, and Brisbane was an airport that was marked to be renovated,” he said. “The first lounge under our $100 million global development program was Sydney. It also included London, Hong Kong, Singapore, Manila and Brisbane.”

Brisbane is a premium market, said Schubert. “We wanted to provide for our premium customers. Plus we just added a fourth weekly flight out of Brisbane. That could extend to daily service, so we needed a premium space for our passengers to relax in and enjoy,” he said. 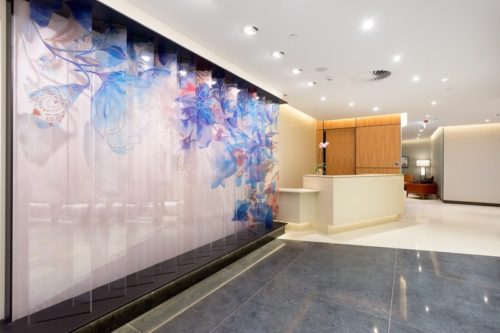 Singapore Airlines was already in the mindset to improve its lounge at Brisbane and it fit with the airport’s redevelopment plans, said Schubert. “As part of its redevelopment phase, the airport created a second-level space above departures that was a nice place to build a lounge,” he said. The SilverKris Lounge is located on Level 4 in the International Terminal’s Departure Hall near Gate 81.

The new lounge is gorgeous and provides a wonderful setting for passengers, said Schubert. “It features new business seating pods that double as work spaces and places to sit, eat and relax. We also offer a world trends dining area with an array of food, along with gorgeous views of the apron and tarmac,” he said.

Singapore Airlines is famous for its batik design, and that has been incorporated in the lounge, said Schubert. “We have a signature screen at the front of the lounge that is a modern take on our traditional design. It really stands out as you enter the lounge,” he said.

For Virgin Australia, it was important that its Velocity Frequent Flyer members, business class guests and lounge members travelling in and out of Brisbane have access to exclusive facilities where they can work, rest or unwind prior to their flight, said spokeswoman Libby Armstrong. The Virgin Australia lounge in Brisbane can accommodate 440 people, and it is located in the airport’s Domestic terminal across from Gate 41. 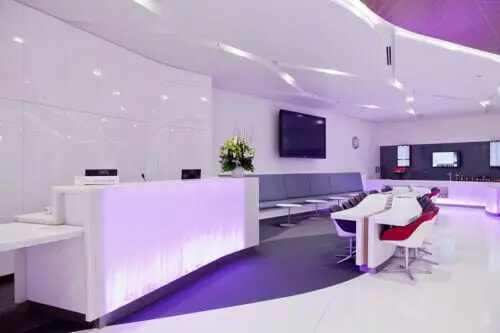 Air New Zealand opened its new Brisbane Koru lounge on March 16, 2016, said General Manager Carrie Hurihanganui. “At Air New Zealand, we are committed to improving the customer experience, and we’re proud to offer our passengers a more seamless transition to the new lounge in Brisbane,” she said. “From the tailored seating zones, relaxing color palette and dedicated children’s play spaces, to the enhanced food and beverage offering, the lounge provides a comfortable haven whether customers are travelling for work or leisure.”

The more than 2,500 square-foot (230 square meters) lounge caters to nearly 200 customers, and Air New Zealand added 70 percent more seating than the previous lounge, said Hurihanganui. “The lounge’s prime position offers large windows and expansive views of Brisbane,” she said. “Spaces in the new lounge include a café area with a self-service food buffet and beverage station, a children’s play area and family space, quiet nooks, business table and bathroom facilities.” The Air New Zealand Koru Lounge is past the duty-free area, up the escalator between Gate 81 & 82. 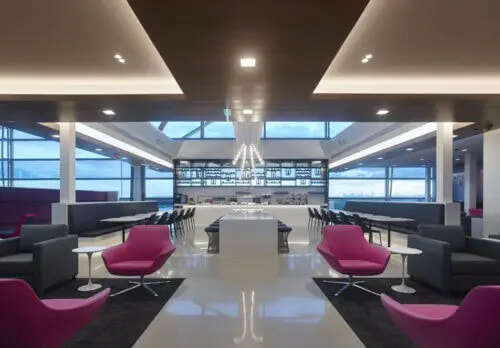 Qantas closed its International First and Business Lounges on June 29 as it began construction on its new International Premium Lounge, expected to open in October. It is currently accommodating eligible travelers with either free access to the Plaza Premium Lounge or giving them vouchers to redeem at food outlets in the terminal.

The airline feels that its lounges are a very important part of the customer journey, said Philip Capps, the airline’s Head of Customer Product and Service Development. “They offer a space for our customers to relax, work and dine in comfort before their flight,” he said. “We continue to invest and improve the customer experience and the new Brisbane lounge will set the benchmark for premium travel in Queensland’s capital.”

The new International Premium Lounge is part of Qantas’ efforts to redevelop all of its facilities at Brisbane, with its domestic terminal lounges also set for an upgrade. It plans to build a new Business Lounge and refreshed Qantas Club, which will include a new valet experience. These Brisbane facilities are expected to open during 2017. 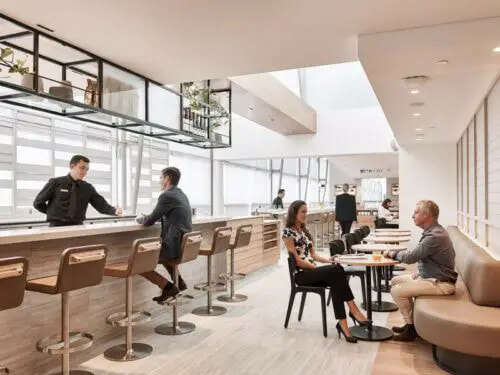 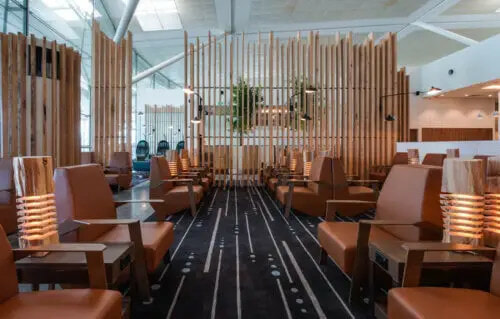 Increasingly, international travelers want and expect access to premium facilities, products, services and food and beverage, and they are prepared to pay money for this experience, said Vandeven. “Access to premium lounges especially can sometimes determine which port some travelers choose to travel to and through,” she explained. “With this in mind, we’re determined to offer an environment, facilities and experience that meets and exceeds these expectations so travelers make a conscious effort to choose Brisbane every time.”