There is lots to love about the British Airways Galleries First Lounge at London Heathrow (LHR) Terminal 5: the terrace overlooking the bustling concourse and busy tarmac, the quirky décor (horse-shaped lamps!), the generous food and drink selection and cooked-to-order meals, and, of course, the Champagne Bar — where else can you taste a Castelnau Vintage 2004, Taittinger Brut Rose NV and Taittinger Vintage 2006 in such serene settings? 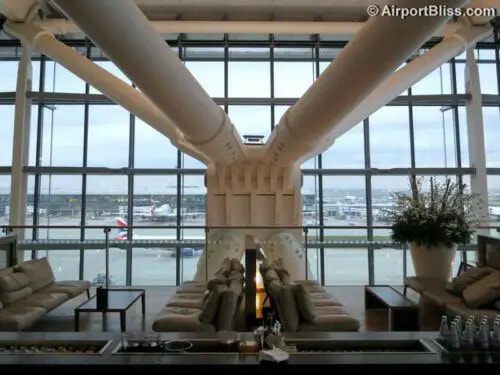 Best of all, as per the generous oneworld alliance rules, the Galleries First Lounge is open to all oneworld Emerald members departing on flights operated by British Airways and other oneworld carriers. (In fact, British Airways operates a separate, much more private lounge, the Concorde Room, for their own First Class customers.)

But behind the apparent luxury lied a more lackluster truth. Terminal 5 is already eight years old, and it has seen an overwhelming amount of traffic. The lounge was designed before electronic devices became so prevalent, and was sorely lacking power outlets. The hardwood floors were showing signs of wear and tear. And British Airways’ signature furniture was, to put it midly, an acquired taste.

British Airways has completed renovations that address the main flaws of the Galleries First Lounge while preserving its trademark features.

The airline has rejuvenated the posh oak wooded floors and restored their original appeal. The carpets have been replaced. British Airways has also phased out the legacy furniture in favor of contemporary furniture which is much more appealing to the modern eye. And perhaps more importantly, power outlets are now available at most seats, in consoles and side tables. 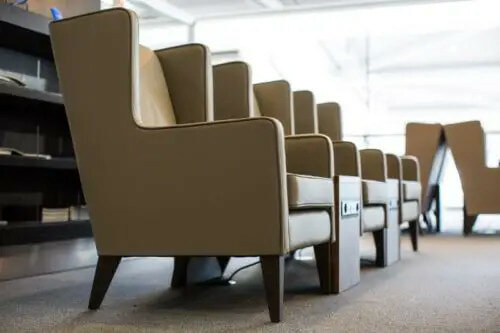 The signature features of the Galleries First lounge were left untouched, though they’ve found a new sparkle in the rejuvenated environment. The artwork is still present; while the Gold Bar, perhaps the most striking visual feature with its gold leaf shine and Swarovski crystal chandelier, continues to offer a broad selection of wines, liquor and spirit. Our favorite room, the Champagne Bar, still offers a posh retreat with self-serve fine Champagnes.

Overall, the refurbishments to the British Airways Galleries First lounge at London Heathrow Terminal 5 are pretty minor, and they won’t address issues such as overcrowding, or the sheer distance between the lounge and most gates. But they bring the club more in line with modern standards, while preserving the British touch and legacy that is the trademark of the airline.

British Airways hasn’t announced what’s next on their agenda, though we’d like to put two items on the wish list. The Concorde Room is in even more desperate need of a refurbishment. And the showers… we could do without the spooky guttural drain noises!