British Airways’ old lounge at Singapore Changi airport Terminal 1 was functional but unremarkable, away from the glamour of the world-class Terminal 3.

What a difference four months make. A few weeks ago, the British flag carrier unveiled a completely refreshed lounge with a new décor, enhanced amenities, and even a new concept, the Concorde Bar, which is currently unique to Singapore but poised for expansion. The Concorde Bar, a lounge within a lounge with a private club vibe is a private space outfitted with luxurious finishes exclusively for British Airways’ First Class and Executive Club Gold customers.

A modern space with a British flair

If there’s one adjective that might sum up British Airways’ lounges, it’s probably “old fashioned.” We say this in a rather affectionate manner, as there is a charm to the hardwood floors, the furniture that you might find at your grandparent’s house, and the rather distinctive upholstery. In short, the design is anything but trendy, but there’s a certain warmth to it. And the signature bars with their vast array of libations might help enhance perception. The lack of power outlets, however, is a real challenge for today’s traveler. 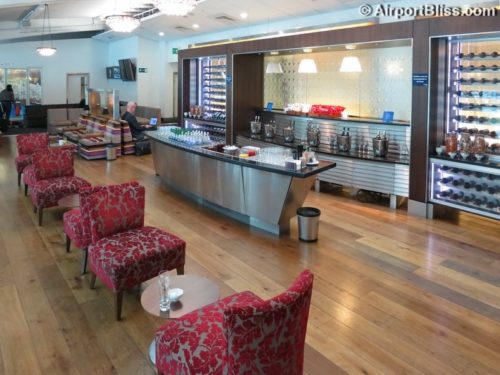 The décor at the new Singapore lounge, designed by Kingsmen from Singapore and London-based Honour Branding, aims at propulsing British Airways into the twenty first century while preserving the soul and traditions of the airline.

The key elements are still there: the translucent blue partitions that divide the space, the mood lighting, the sofas, the red armchairs, the hardwood floors. But that’s where the similarities end. The shapes and patterns are definitely more modern. Exit the awkward upholstery, enter solid colors, clean lines, and modern art, including pieces from Singapore and British artists. Power outlets and USB ports are available throughout — at 88% of the seats, British Airways points out with keen precision. 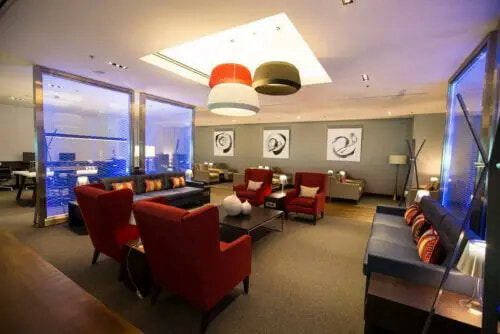 The new design emphasizes privacy with individual side tables, high backed chairs, privacy dividers, and booths with leather benches. Interestingly, the designers have managed to increase the capacity of the lounge by over 40%, with a total of close to 160 seats, just by using the space more efficiently. We’ll wait to judge — the pictures look great and the layout spacious enough, but time will tell if the lounge feels excessively crowded. British Airways operates three daily flights from Singapore: two to London Heathrow and one to Sydney, Australia, and oneworld Emerald and Sapphire members also have access to the lounge.

Of course, the signature floating bar is available at the center of the lounge, featuring a vast assortment of food and libations. Again, the design will be immediately familiar to British Airways’ frequent flyers, but the materials, lighting, and finishes look resolutely more modern, especially in comparison with their Heathrow counterparts. 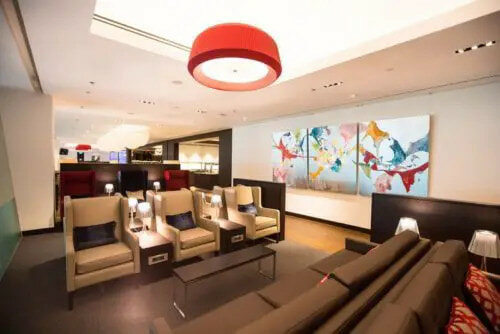 The room features a discreet entrance and is accessible only with a code, which the lucky recipients will receive at the reception desk. Behind the door, patrons will find a space with a completely different vibe, and a décor which contrasts sharply with the design of the main space. At the Concorde Bar, there’s no attempt at maintaining a connection with the soul of the traditional British Airways lounges. The concept is new and resolutely different. 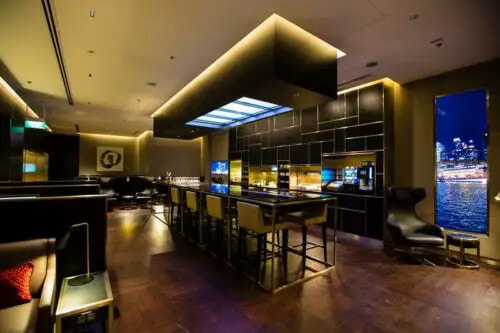 The private room, with space for 40 customers, features black Nero marble, European oak flooring, and walls that double as projection surfaces displaying Singapore scenery, in sync with the time of the day. The concept is akin to sitting at a revolving restaurant, gazing at the surrounding vista, with the exclusivity of a private club as an added bonus.

In this posh environment, patrons may enjoy an upper scale food and beverage selection served by a dedicated bartender. Customers will also benefit from enhanced privacy, with a range of seating options including sofas, booths, and bar style seating. If the overall layout of the lounge is a bit busier than it used to be, at least the Concorde Bar should remain a haven of privacy.

There’s a silver lining, of course. The Concorde Bar is off limits to top-tier oneworld frequent flyers, which, according to oneworld rules, should normally receive First Class lounge access. By capitalizing on the Concorde brand, British Airways makes a smart move: the Concorde Lounges in London Heathrow, New York JFK, and Washington, DC are already the exclusive territory of the airline’s top customers. In London, British Airways goes as far as operating a First Class lounge exclusively for partner airlines and oneworld Emerald members while their own First Class passengers enjoy a full service restaurant at the Concorde Lounge. The Concorde Bar is a logical expansion — and the smaller footprint is just one of the reasons the space isn’t called a First Class lounge: the tight access rules are unlikely to be a surprise.

The Concorde Bar concept is exclusive to Singapore at this time, although British Airways is planning on rolling out the concept to other airports where they cannot operate a fully separate First Class lounge. Dubai is slated to be the next location. 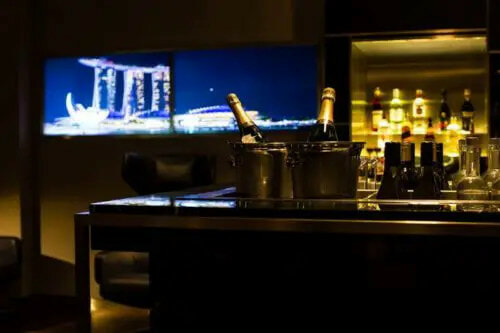