Via Experience The Skies, Cathay Pacific will be terminating their partnership with The Hong Kong and Shanghai Hotels, Ltd., operators of the famed Peninsula hotel on May 1st, 2016. The hotel chain currently provides staff, catering and services at the airline’s flagship Hong Kong (HKG) lounges including The Wing, The Pier and The Bridge.

The airline has been coy about the change, merely indicating that it is justified by “business reasons.” It’s unclear what it means for patrons. We do expect Cathay Pacific to uphold their service standards, especially after the recent much hyped grand opening of the renovated The Pier First Class lounge. 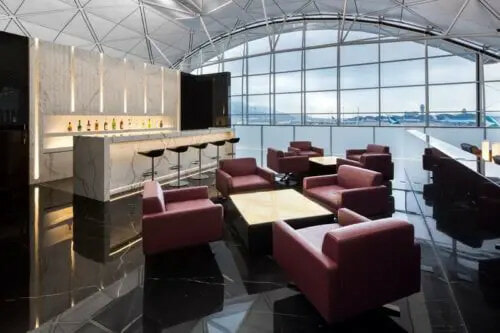 Plaza Premium, the world’s largest independent lounge operator, which operates over 90 lounges at 23 airports, is widely expected to take over the Peninsula contract, although Cathay Pacific has yet to make a formal announcement. In addition to building and operating their own lounges, Plaza Premium already acts as a management or catering partner at several locations — for example, they’re behind the new American Express lounge in Sydney, Australia.

While the Peninsula logo certainly added some cachet to the experience, at the end of the day service and food quality and are more a factor of how much the airline is willing to spend and of the standards that they impart on their vendors, than a factor of the caterer itself. Regardless, it might be prudent to expect minor cuts or teething issues when the new catering provider takes over.