2015 is an exciting for premium passengers, when it comes to ground services. Several airlines, including Air New Zealand, United and Singapore Airlines, American Airlines and Hawaiian Airlines, are investing in an overhaul of their lounges worldwide.

Cathay Pacific is most famous for its acclaimed lounges at their Hong Kong home base, with jewels such as the luxurious cabanas at The Wing First Class lounge. But it’s fair to say some of their worldwide clubs fall short of expectations. Fortunately, the carrier embarked in 2014 on an ambitious renovation program, which culminated in the unveiling, in December 2014, of the first redesigned lounge at Tokyo Haneda airport.

The design, crafted by London-based studio Studioilse, emphasizes the notion of well being, which translates into the use of warm materials and tones, soft and recessed lighting, and a specific attention to the acoustics of each space. Design elements include cherry wood walls, limestone floors, green ceramic tiles, interior plants, and art work.

Ultimately, the goal is to turn sometimes utilitarian spaces that scream “airport” into an extension of the home, making travelers feel welcome and relaxed. Naturally, comfort and personal productivity are also paramount – as expected from modern lounges, power outlets are available at every seat, along with fast, complimentary Wi-Fi, side tables, and a variety of seating arrangements ranging from designer furniture to seats overlooking the tarmac.

Other aspects are changing, however. A key element of the new design is that it merges Business and First Class lounges into a single, larger space, although the airline envisions exceptions to this approach at major premium destinations such as London (and Hong Kong.) This is certainly a reasonable move, in light of declining First Class traffic worldwide, and the fact that small First Class lounges often miss the mark — either they’re too small to feel luxurious and offer expansive amenities, or they’re too busy given the generous oneworld access rules which grant top-tier customers access to First Class lounges.

Opened in may 2015 in the new Terminal 3, the new lounge is a very much needed upgrade over the airline’s former faded club in Terminal 1. The new lounge is twice as large as the old one, and follows the Cathay Pacific’s new design language, with a few local custom touches such as artwork by Philippine artists and a Philippine breakfast selection.

In addition to an elegant and relaxing space, patrons will also enjoy a broader selection of food and beverages. Besides the Noodle Bar, which serves cooked to order Asian noodles including dandan mien and wonton noodle soup, a selection of tapas and deserts is available. The Cathay Pacific lounge is easily Manila airport’s best lounge and should serve as a competitive advantage to the Hong Kong carrier.

Just a week ago, Cathay Pacific unveiled their brand new lounge in Bangkok. Where Cathay Pacific used to have two small separate lounges, they now offer a combined facility in Concourse G, which is twice as large as the former business class space – the airline took over the space formerly occupied by the adjacent former British Airways lounge.

The space will be feel familiar to patrons who have visited the new Tokyo Haneda or Manila locations, as it features every element of the new design, plus local touches such as a daily Thai breakfast.

With the opening of this new lounge, the former club in Concourse D has closed. 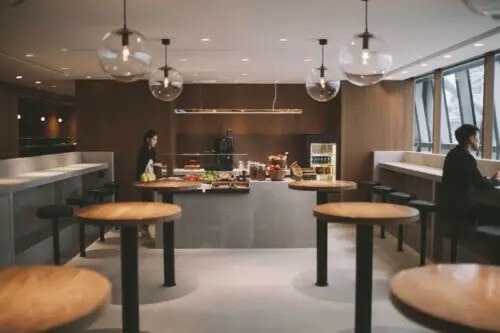 The Taipei location is scheduled to be refreshed in the fall, with London following either late 2015 or early 2016. But all eyes are on the new The Pier First Class lounge in Hong Kong, which has closed for a complete overhaul after twelve years of faithful service.

The flagship facility is scheduled to reopen this Saturday, June 20th 2015. New features are expected to include private alcoves with day beds overlooking the tarmac, an a-la-carte restaurant complemented by faster dining options, and a “well being area”, which has yet to be defined — we can’t wait to find out more!

And if that’s not enough, the adjacent The Pier Business Class lounge will close, in turn, for an equally exciting overhaul, until 2016.