Last week, Alaska Airlines launched its second Board Room lounge at their hometown airport. There was little fanfare overall, besides an appealing teaser video: the new space, nestled within Seattle-Tacoma airport’s North Satellite, is fresh and functional, but small, and technically temporary — the airline has plans for an eventual roof-top lounge.

But the expansion of Alaska’s footprint meant one thing: Delta had to answer. The frenemies (still technically partners, although the remnants of the partnership are dwindling fast) have been fighting relentlessly for the Seattle market, doubling down on new routes, promotions, and perks for Alaska and Seattle based customers. 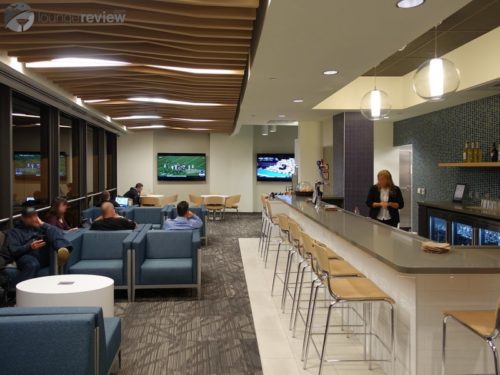 And so today, Delta confirmed the arrival of an additional new behemoth lounge at SEA, located between Concourses A and B on a new upper level. At 21,000 sqf (1,950 sqm), it is slated to be one of the largest Sky Clubs system wide.

Obviously a plan of this magnitude has been in the works for a long time, but we just can’t help but smile at the timing of the announcement on the heels of Alaska’s (very much delayed) new lounge opening.

The new Sky Club will supplement the current location in Satellite S which opened in 2011 and ranks #1 on our chart (see the Definitive Guide to the SEA Lounge Scene.) While we’re not fans of the bold white and red, and somewhat industrial design, the lounge boasts sweeping views of the tarmac and Mt. Rainier, and the amenities of the club are unparalleled at Seattle-Tacoma. In addition to a generous complimentary food selection, the club features numerous comfortable and private cube chairs, two shower suites, and a tranquil slumber room. 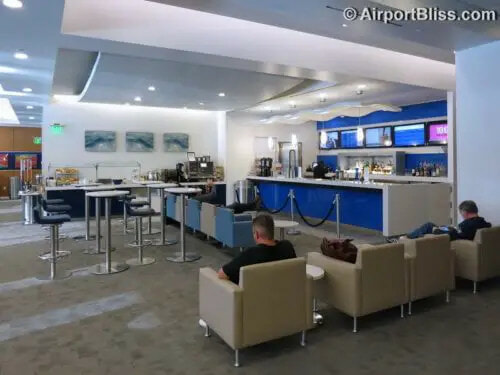 The new Sky Club will up the ante. Delta promises “contemporary furniture with power outlets near every seat, warm wood finishes reminiscent of the Pacific Northwest, rotating art curated from local galleries, a unique spa space to rejuvenate or relax, and personalized flight assistance among many other amenities” as well as “a complimentary menu featuring chef-driven selections highlighting local flavors along with a complimentary local IPA craft beer by Georgetown Brewing Company, Seattle’s own Starbucks coffee and local wines by the glass curated by Master Sommelier Andrea Robinson.” There will also be showers.

The description hints at a departure from the modern but perhaps bland décor that the airline has favored over the last few years. We expect the new facility to be similar to the new gorgeous Sky Club at San Francisco airport, concept wise: a custom design taking inspiration from the region, a full complimentary hot food selection with an on-site kitchen, spa inspired shower suites, and an elevated level of service.

Competition with Alaska aside, Delta’s massive and sustained growth at Seattle-Tacoma does justify a second club. The current location in Satellite S is inconvenient for passengers departing from Concourse A and often busy. As a stop-gap solution, Delta currently grants business class passengers access to The Club at SEA in Concourse A, a pay-in lounge which while pleasant and elegant, is pretty basic compared to the Sky Club. Still, the dimensions of the new club exceed our expectations and say a lot about the airline’s plans for their Pacific Northwest hub. The Concourse A location also increases Delta’s foothold within the main terminal, where the airline is expanding on United’s turf.

With the recent opening of the American Express Centurion Studio, Concourse B is seeing an influx of luxurious lounges. It’s interesting to note that American Express justified the smaller “Studio” location by the lack of available real estate in the terminal. Apparently, Delta didn’t face the same challenges, and with hot meals and showers, the new Sky Club is poised to overshadow American Express’ offer.

The arrival of a new Delta Sky Club a Seattle Tacoma airport is excellent news for Delta’s customers, and by extension for SkyTeam passengers. The saga is not over yet — Alaska is rumored to be planning for a third lounge.