Without any fanfare, this week Delta opened a new Sky Club lounge at their Atlanta hub in Concourse D, by gate D12. This new facility supplements the existing Sky Club by gate D27 which will remain in operation, and brings the number of Sky Clubs at ATL to a whooping ten across Concourses A, B, C, D, E, F, and T.

The new Sky Club might feel oddly be familiar to some: the lounge occupies the space where the United Club (f.k.a. Continental’s Presidents Club) once stood. United closed their lounge back in January, in anticipation to their move to Concourse T where a new United Club will eventually open, though at the moment United passengers are still club-less. 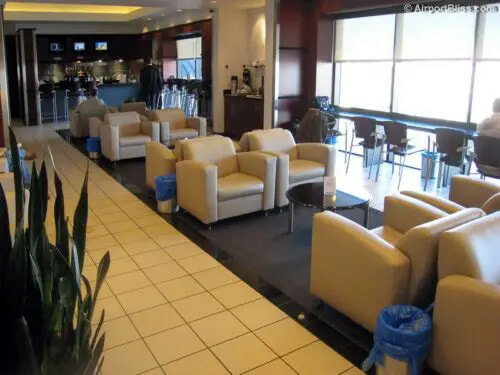 Under United’s management, the facility was pretty low key. While Delta has spruced up the space, the dimensions remain small, and the club will not offer hub grade amenities such as premium beverages or showers. In fact, at this time, the bathroom is still being renovated and expanded. However, the club does feature Delta’s traditional food selection, which includes a sizeable continental breakfast spread, soups, veggies, dips, salad, cookies and fruit.

The availability of a new Sky Club by gate D12 is good news to Delta’s regional passengers, as the D27 club is also on the small side and can get busy at peak times.

Next on Delta’s agenda is the opening of a (much delayed) new Sky Club at San Francisco airport (SFO.) The new, airside bi-level club in Terminal 1 will replace the current small Sky Club located landside. The new lounge was initially scheduled to open back in June and a new date hasn’t been announced, though the expanded amenities, including shower suites, promise to make the wait worthwhile.