It’s been long in the making. Construction started early 2015, with an opening initially anticipated in May but soon pushed to June. The new date seemed pretty firm, with signs around the construction area trumpeting the arrival of the new club. Alas, June passed without an official update. The wait will soon be over: the first patrons will enjoy the new club on Friday after a brief opening ceremony.

While San Francisco is a secondary market for Delta, it remains a key focus city with transcontinental routes to New York JFK and Atlanta as well as service to Detroit, Honolulu, Cincinnati, Los Angeles, Minneapolis/St. Paul and Salt Lake City; plus Seattle where Delta has been expanding at an aggressive pace, competing head to head with Alaska Airlines and chipping away at United’s market share.

With competition on transcontinental routes at an all-time high, Delta needed to improve its ground services. And given United’s overall paltry offer despite being the dominant player in San Francisco, the airline has a chance to shine. It has risen to the challenge.

The new Sky Club in Terminal 1, Concourse C, by gate 40, will replace the tired and worn facility that Delta has been operating landside next to the checkin area. Exit the dark place with an old fashioned décor — the new club, located on a mezzanine above the concourse, features Delta’s latest and resolutely modern design, and boasts splendid views of the tarmac. 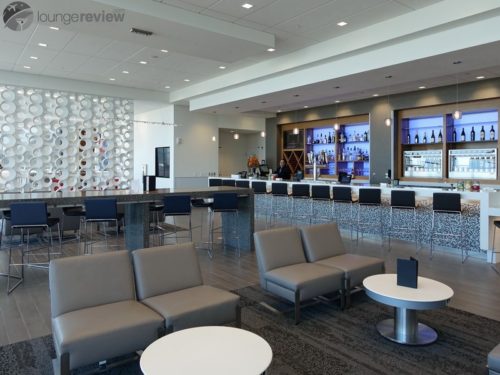 The floor plan below reveals a large space with an efficient layout. The L shaped club will seat over 150 customers, with power outlets at every seat. Seating options include traditional chairs, cube chairs which provide enhanced privacy, counter-style tables to gaze at the view, café style seating, and a dedicated business center. The new club will be Delta’s first Gold LEED certified lounge. 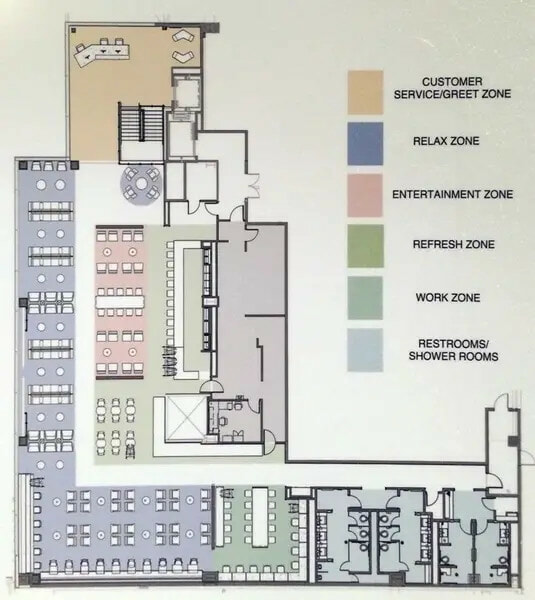 Delta envisions the new Sky Club as more than a place to sit, with an unparalleled list of amenities for a club located in a secondary market. A highlight is the two shower suites, which each come with a sink and toilet, and feature Isaac Mizrahi bath products. Amenities such as toothbrushes and deodorant will be provided. On the flip side, we can’t help but wonder whether the bathrooms might be somewhat under dimensioned.

An emphasis has also been placed on the food and beverage offering. The new Sky Club will offer a selection of complimentary beverages, including:

The bar will offer a broad range of drinks for purchase, including a selection of Sonoma wines picked by Delta’s Master Sommelier Andrea Robinson.

More original and unexpected is the partnership with local chef Mai Pham of Lemon Grass Restaurant and Star Ginger in Sacramento. Pham will bring Asian-inspired flavors to the club, with a selection of dishes available for purchase. The menu is available online and reveals a selection of appetizers in the $5-$11 range, salads for $9-$11, flatbreads and noodle soups for $9, and sandwiches in the $10-$12 range. 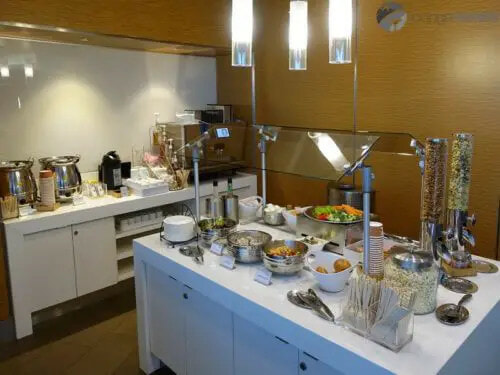 Overall, the new Sky Club is bound to be a major upgrade over the current location. The move airside in notable in itself and will be a relief for many customers, but the addition of showers and the availability of an expansive food and beverage selection significantly raise the bar. United operates three lounges at SFO and has just rolled out an enhanced complimentary food selection that matches Delta’s offer overall. However, the major player in the Bay Area does not offer showers, except to passengers arriving from intercontinental flights in the morning in a premium class or flying in international First Class. The two main United Clubs are also in dire need of a refurbishment, and do not offer food for purchase. Delta’s move is significant: despite being an underdog in the San Francisco market, they will soon offer a better lounge product.

Overall, for domestic travel from San Francisco, the best lounge will remain the relatively recent American Express Centurion Lounge in Terminal 3 which offers complimentary, high quality full meals and libations to Platinum and Centurion card members. (Unfortunately, Terminals 1 and 3 are not connected airside at this time.) But considering American Express’ unique position in the lounge market and the fact that the Centurion Lounge is often painfully crowded, Delta is rolling out a strong offering that is bound to significantly enhance passenger experience and help strengthen their position in the Bay Area.

Update: Our review and pictures of the new Delta Sky Club SFO