Emirates has opened its first dedicated lounge in Japan, at Tokyo Narita International Airport (NRT), Terminal 2, adding a 38th lounge to their worldwide network. The Narita lounge boasts the carrier’s latest design, also featured at the brand new Los Angeles International Airport (LAX) lounge which opened just a few months ago. The pace at which Emirates is continuing to build new lounges is a testament to the airline’s desire to offer a consistent premium experience around the world, without the support of partners.

The Narita lounge features the airline’s signature amenities, including a splendid buffet with local and international specialties, comfortable seating, and shower facilities. As all international lounges, it welcomes First and Business Class customers as well as Platinum and Gold members of Emirates Skywards; there is no dedicated space for First Class or Gold passengers.

The luxury carrier is also refurbishing their London Heathrow Terminal 3 facilities. Through October 15th, 2015, eligible passengers will be directed to the British Airways Galleries Club. While the Emirates Lounge at London Heathrow was perhaps one of the airline’s least exciting clubs, passengers should adjust their expectations when using the British Airways Galleries Club — catering is less elaborate and the lounge often pretty busy. And unfortunately, in light of Emirate’s policy of offering combined Business and First Class lounges worldwide, First Class passengers do not have access to the superior British Airways First Class Lounge. Rest assured that the refurbishment should not disappoint, though! 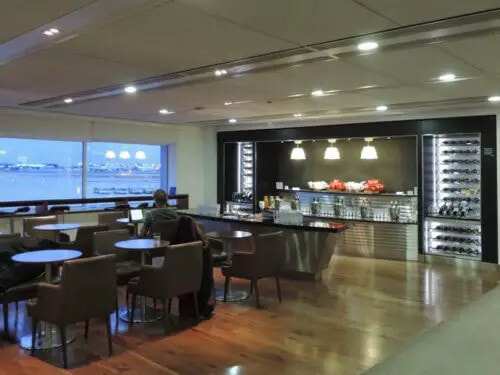