Here’s a brief recap of what happened in the lounge universe in February: Emirates opened a new lounge in Los Angeles, Cathay Pacific’s The Pier First Class lounge in Hong Kong is reopening soon, American closed its lounge in Sao Paulo, and United announced investments in their lounge network.

The Emirates lounge network keeps expanding. Despite operating a single daily flight to Dubai out of Los Angeles — one of the longest flights operated by an pbus A380 in the world — Emirates has chosen to open their own lounge.

The facility, located in the Tom Bradley International Terminal next to the Star Alliance business class lounge, features a design and amenities that will be familiar to Emirates flyers: high end marble, Rolex clocks, shower suites, and a dining area with a generous buffet featuring a broad selection of appetizers, cold and hot entrees and tasty desserts.

As expected, there is no separate area for First class passengers as Emirates does not operate dedicated First Class facilities outside Dubai. Nevertheless, the new lounge is a significant upgrade for travelers in all classes of service. Previously, Emirates used the Korean Airlines KAL lounge, which, while new and elegant and featuring a terrace overlooking the terminal’s grand atrium, is routinely crowded and has extremely limited food and beverage selections — our ultimate guide to LAX ranked the KAL lounge far behind the adjacent oneworld and Star Alliance facilities.

The Emirates Lounge at LAX welcomes departing Business and First class passengers as well as Emirates Skywards Gold and Platinum members. Arrivals facilities are not available.

If you have a chance to experience this new lounge, please share your comments and pictures! 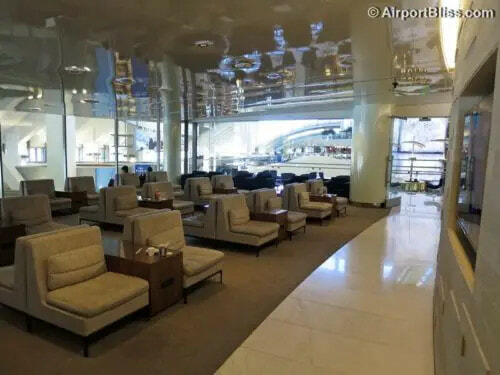 The First Class section of The Pier lounge in Hong Kong lounge is currently closed for renovations, and First Class passengers are invited to make use of a reserved area within The Pier Business Class Lounge by gate 66. The excellent Australian Business Traveller online magazine has the scoop on what’s coming up at the flagship lounge.

Except “amazing showers,” the traditional noodle bar, and private daybeds overlooking the runway. It all sounds exciting and we can’t wait to see the first pictures, although it should be noted that the lounge will remain open to all oneworld Emerald members and as such will still not offer the privacy that First Class passengers might seek.

oneworld elites and premium class passengers may prefer to use the LAN & TAM VIP Lounge instead — a brand new facility with a substantial buffet in a pleasant and modern setting. Both the Executive Lounge and the LAN & TAM lounges have shower suites.

Delivering on merger promises, United has started to invest in their lounges. Following the unveiling of a new design in Chicago, United opened brand new lounges in Seattle, San Diego, Boston, London, and upgraded furniture at several clubs including Denver and the Global First Lounge in Chicago.

According to a note to employees, the clubs at Reagan Washington National (DCA), Chicago (ORD), Hong Kong (HKG) and Tokyo (NRT) will all be refreshed in the spring 2015 timeframe. Additionally, the airline expects to open their new club in San Francisco, replacing the temporary T3E lounge, by the end of the year.

Atlanta travelers rejoice, while we announced last month the closure of the Concourse D United Club in Atlanta, a new facility will open in the fall in concourse T.

And finally, the new Los Angeles lounge is not expected to open before 2017 – a sad state of affairs considering that United’s two clubs at LAX there reached the very bottom of our ranking of all airline lounges at LAX. We can only hope that the new facilities will be worth the wait. 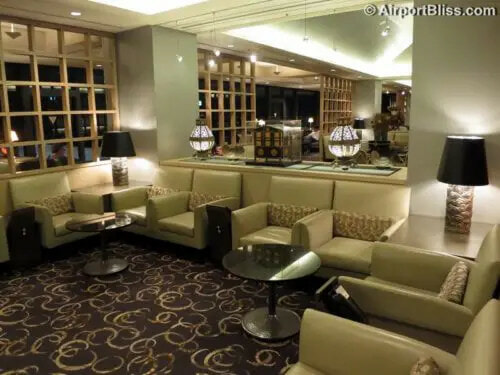 Also, United will be announcing updates to food and beverages later this week. Planned enhancements include an expanded breakfast selection with hard-boiled eggs and oatmeal, as well as soups and salads during the day. The airline has also hinted at additional, undisclosed enhancements. Frankly, any update to the current offerings can only be a true enhancement so we’re looking forward to the details!