It’s an exciting time to fly Alaska. The Pacific Northwest’s darling keeps expanding its network and bringing new benefits to customers. While the mechanics of the merger with Virgin America are still cranking behind the scenes, the carrier is continuing to expand its relationships with its partners. Days ago, Alaska’s Lounge members and elite customers gained access to all Qantas Clubs and Qantas International Business Lounges worldwide. On Friday, the airline will unveil a new lounge at their Seattle-Tacoma airport home base, with elevated amenities and unparalleled views of the runway.

Alaska graciously invited us to a preview this morning, while construction crews were putting the final touches on the fresh new space. 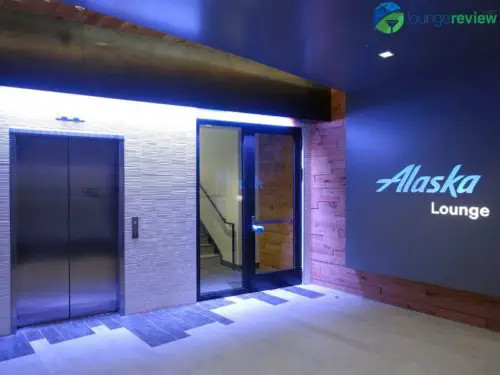 Long awaited, the new Alaska Lounge, located in the main terminal within Concourse C to the left of gate C16-C, complements the existing locations in Concourse D and Satellite N.

The venerable two-story club in Concourse D—formerly known as the Alaska Boardroom and the airline’s flagship—remains the largest. In November 2015, on the heels of a massive expansion, Alaska opened a second lounge by gates N1-N2, offering passengers departing from the North Satellite a more modern and convenient location than the legacy club in the main Terminal.

At 4,650 square feet, the new club will bring another 87 seats, and provide another alternative to the Concourse D lounge. Located steps away from the Concourse C shuttle train stop, the new Alaska Lounge is equally convenient to passengers departing from the North Satellite and Concourse C.

Facing severe crowding in the past, Alaska recently eliminated guest privileges for Priority Pass members, and occasionally had turn the latter away. While the guest policy remains unchanged at this time, the opening of the new Concourse C lounge should help mitigate crowding. 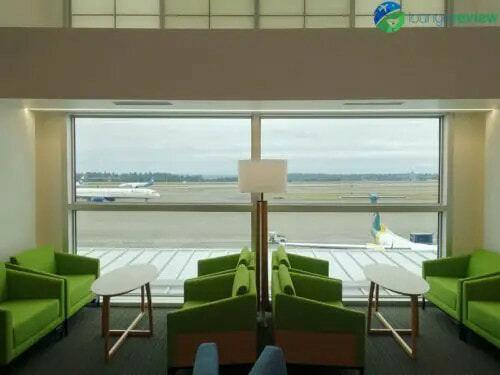 A fresh design inspired by the Pacific Northwest

The new Alaska Lounge in Concourse C boasts a fresh new design which pays homage to the airline’s roots and the Pacific Northwest, while taking a stark departure from the legacy décor on display at the Concourse D club.

Adjacent to gate C16-C, the entrance sets the tone with a successful but unlikely alliance between hardwoods, color LED accent lighting, and dark metal.

A grand staircase and an elevator lead guests to an upper-floor space, which once belonged to American Airlines’ Admirals Club. 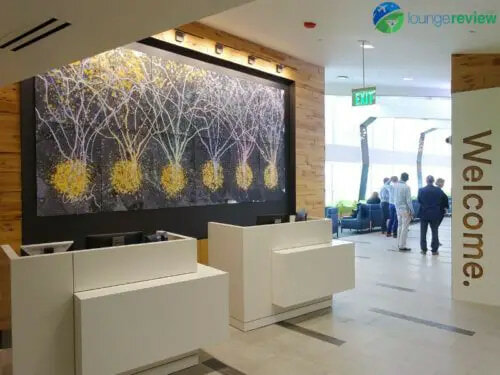 Dominated by an original painting from renowned artist Dale Chihuly—a Seattle favorite—the reception area features two customer service desks. Opposite is a living wall made of moss—which feels like a nod to the American Express Centurion Lounge—flanked by an inviting etched welcome sign. 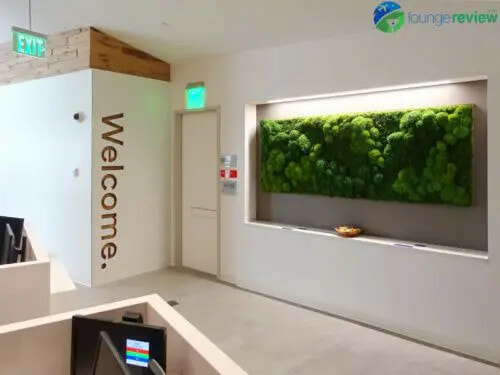 The lobby opens onto a convivial and luminous seating area, with a calming water feature as the backdrop. The design effortlessly bridges the gap between tradition and modernity with natural materials, soft yet joyful colors, LED chandeliers, and the conveniences of a modern airport lounge such as USB ports and power outlets at every seat.

The windows tint automatically: as on a Boeing 787 aircraft, the glass panels darken as the weather and sunlight shift, eliminating the need for blinds or shades. 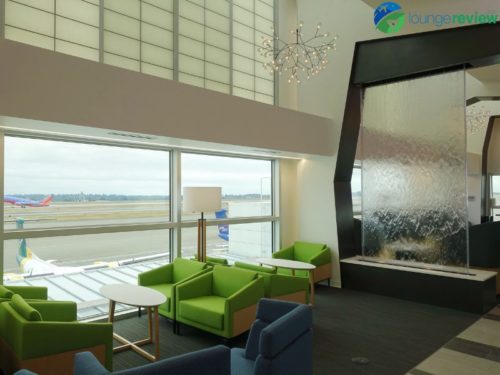 Despite its modest dimensions, the new Alaska Lounge feels spacious and inviting, thanks to high ceilings and a long window wall which lets ample natural light in and reveals stunning views of the adjacent runway, and the Olympic mountains in the distance. A haven for airplane lovers, the club is bound to become the airport’s most coveted spot for a front-row view on the action.

The smart layout aims at combining density with guest privacy. While the lounge packs close to 90 seats in a relatively compact space, the play of angles, high-backed chairs, the large walkway, floor lamps, and convivial coffee tables break out the space and foster a feeling of serenity and privacy. 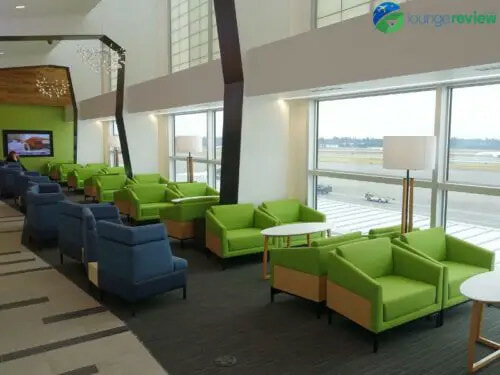 The décor is dotted with design touches reminiscent of the Pacific Northwest. Hardwoods and blue accent lighting run along the ceiling, while two flat panels display video of tranquil scenery.

The water feature is the gateway to a large bar area, which is outfitted with dining tables as well as six exquisitely private cube chairs, which are bound to be popular. 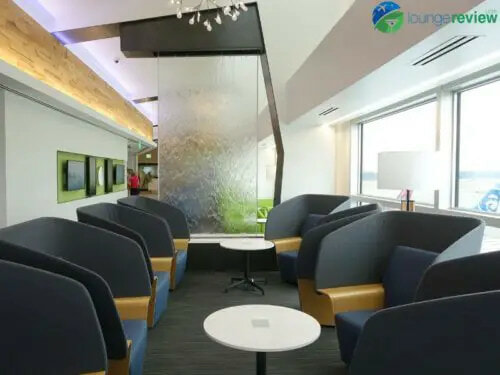 A bright space with two window walls, the vibrant bar area features an eclectic mix of furniture and materials. Guests will find a variety of seating options including dining tables, cocktail tables, and booth seating with partitions for a greater sense of privacy, complete with colorful pillows.

Power and USB outlets are built into every dining table, and also conveniently located under the bar. 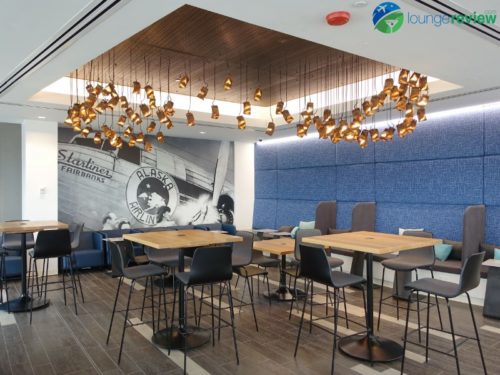 A vintage monochrome picture of Alaska’s Starliner gives a nod to the airline’s origins in Alaska, while cardboard lamps hang graciously and seemingly randomly from the ceiling. 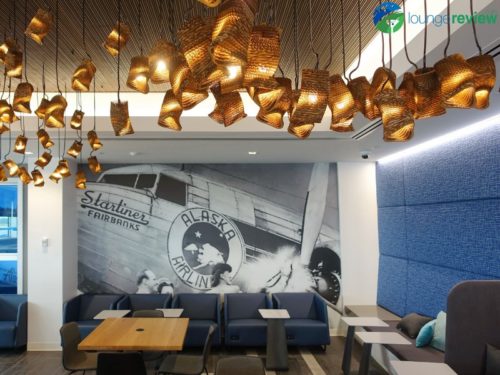 The large bar is surprisingly bare in comparison, though the vibrant views in the backdrop make for an ever-changing canvas. In response to passenger feedback, and to preserve the tranquility of the lounge, the only TVs are located behind the bar. 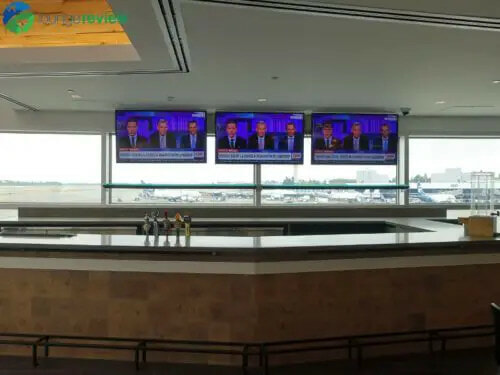 The design of the new Alaska Lounge at Seattle-Tacoma airport underlines the airline’s drive to modernize their brand, while remaining true to their traditions. There is no hint at a desire to draw the Virgin America crowds—the new lounge, while resolutely modern, is a far cry from the perhaps excessively trendy—and now defunct—Virgin America Loft at Los Angeles airport. The airline is still mulling over how to align brands down the road; possibly by offering a more adventurous beverage selection.

Food, drinks, and amenities at the new Alaska Lounge at SEA

Alaska passengers will find the usual line-up of amenities at the new Alaska Lounge at Seattle-Tacoma airport Concourse C, including a substantial breakfast selection, soups, snacks and salads throughout the day, complimentary house drinks, fast Wi-Fi, and business amenities.

The convivial buffet area features an island, which adds a homely touch while facilitating the flow of guests throughout the space. 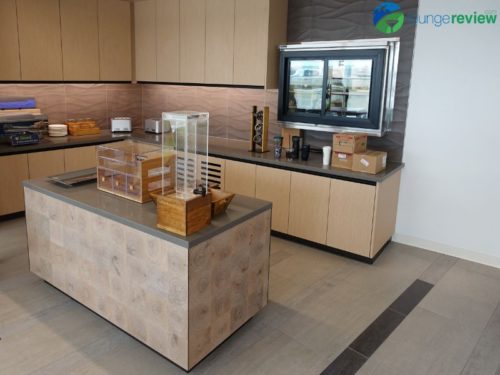 The morning breakfast spread includes a rotating selection of pastries and bagels baked by local bakeries, a yoghurt bar with a choice of toppings, steel cut oat meal, as well as a staple of Alaska Lounges: a pancake machine which delivers fresh pancakes at the touch of a button. An elaborate Starbucks espresso machine is also available along with a selection of syrups. 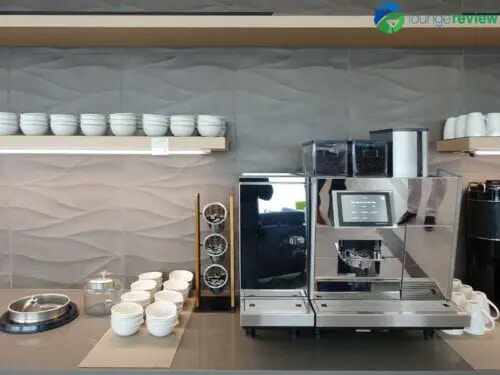 Throughout the day, guests will enjoy a selection of soups, salads, and cheeses, as well as tapas in the evenings.

Overall, the food selection will be a small step above what the airline offers at other club locations. However, the new Alaska Lounge in Concourse C comes with a fully-equipped kitchen, paving the way for the airline’s ability to serve hot food in the future. Alaska is considering upgrading its offerings over time, and the new club will be a fertile ground for experimentation. The carrier also hopes to harmonize the offerings system wide, as it upgrades other lounges with additional storage and serving space.

Drinks wise, patrons will find a self-serve soda dispenser, as well as a wide selection of complimentary alcoholic beverages at the bar. Beers on tap include Alaskan Amber Ale, and microbrews including Airways Curbside Porter and Pyramid IPA. Premium beverages are also available for purchase. 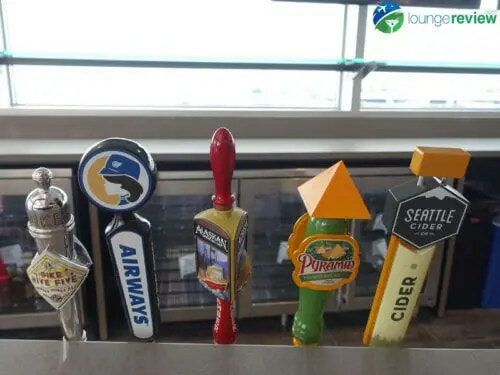 The bathrooms boast an elegant entryway with a shelf where passengers may place their laptop or other small personal items. And fortunately, they’re dimensioned appropriately, unlike at the North Satellite lounge which has a single unisex stall.

Alaska still does not offer showers, which while unfortunate is understandable since the airline flies exclusively within North America.

New Alaska Lounges coming up at JFK, SEA, and LAX

While the designers will incorporate local touches at every location, the new Alaska Lounge at Seattle-Tacoma airport Concourse C gives us a hint of what to expect at future club locations, including New York-JFK and Los Angeles.

At New York-JFK, Alaska is consolidating operations with Virgin America and moving to Terminal 7. The vintage terminal is receiving a face lift, thanks in part to a significant investment by partner British Airways. According to the airline, construction is progressing smoothly, and the new Alaska Lounge—which will be the only one on the East Coast—is scheduled to open early 2018.

At Los Angeles airport, Alaska is planning upgrades to their vintage but cozy lounge in Terminal 6. While there are no firm plans for a club at San Francisco airport, the carrier is exploring options. In the meantime, Alaska Lounge members continue to receive access to the superb and newly-expanded Cathay Pacific Lounge.

But all eyes are on Alaska’s future new flagship: a stunning rooftop lounge, to be built on top of the reconstructed North Satellite, with sweeping 180 degree views of the airport grounds and Pacific Northwest scenery. It will take until 2021 for the vision to materialize. Until then, come visit the beautiful new Alaska Lounge in Concourse C. During the first week of operations, guests will be treated to a complimentary glass of Champagne.