Yesterday, SkyTeam officially unveiled its newest joint lounge, located at Vancouver airport. The 20-member airline alliance celebrated the launch in style with live music, libations, and a full East-meets-West buffet spread representative of what passengers may look forward to.

In attendance were Perry Cantarutti, SkyTeam’s CEO and managing director; Jacques Vareilles, SkyTeam’s Brand and Communications director; Scott Norris, Vancouver Airport Authority’s Vice President of Commercial Development; and Jeffrey Stern, CEO of Global Lounge Network, the company which was chosen to develop and operate the facility on behalf of SkyTeam. The team worked in concert to deliver the new lounge mostly on schedule—a notable feat for an airport construction project. 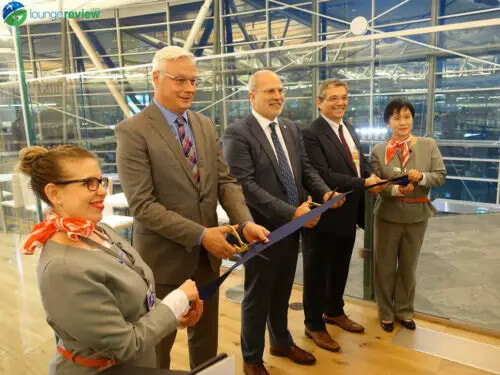 Ribbon-cutting at the SkyTeam Vancouver Lounge

The new SkyTeam lounge officially opens to the public today, and will operate 24 hours a day. It is bound to be a significant upgrade over the Plaza Premium Lounge formerly used by SkyTeam elite and premium passengers, which while elegant and well-appointed, suffered from chronic crowding.

The SkyTeam Lounge is situated atop a brand new structure at the heart of the terminal, in the vicinity of gates D53-D67 in the international concourse, in front of the Cathay Pacific Lounge. Vancouver airport and SkyTeam have worked in tandem in order to revitalize a formerly unused space, and capitalize on the terminal’s cathedral ceilings. New luxury duty-free stores have sprung up on the ground floor, while the lounge floats above the concourse on an upper-level mezzanine.

The lobby, located on the ground floor, allies the sleek curves of a designer reception desk with the serene appeal of a moss living wall in the backdrop. Guests access the lounge through a single elevator. 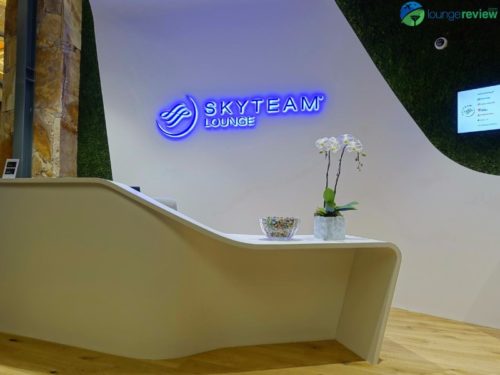 The lounge is comprised of two wings linked by an elegant wood and glass bridge. Bathed in daylight, the club boasts panoramic views of the tarmac, with sights that extend as far as the water and mountains on clear days. Tall glass panels help block noise that bleeds from the concourse, while preserving the views in every direction. At dusk, the space glows in heart-warming colors.

The décor incorporates the DNA of the SkyTeam-branded lounges worldwide, with smooth and modern curves, natural accents of wood, shades of whites, and Earth tones enhanced by playfully-colored furniture.

Luminous and airy, the design is a perfect fit for Vancouver airport: the hardwood floors mirror the wood panels on the ceiling, and the curved beams that support the roof of the terminal seem to recall the smooth shapes of the partitions. 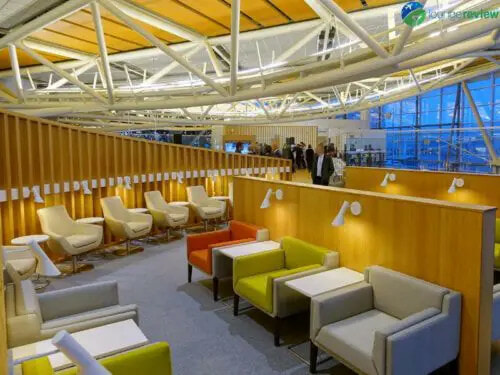 At 5,600 square feet (528 square meters), with seating for 126 passengers, the SkyTeam Lounge is a much more intimate space than Air Canada’s sprawling new two-story club, yet should be spacious enough for peak-time departures.

The layout accommodates a variety of seating options for solo travelers and groups alike, with privacy-enhancing partitions that shape the space without blocking natural light.

The east wing sports a circular seating area with individual seats at the periphery and additional chairs in the center separated by low partitions. All seats come equipped with an individual lamp, a side table, and power and USB outlets. A TV monitor displays riveting digital art, and in the rear are two recliners in semi-private spaces, also with a handy lamp and power outlets. 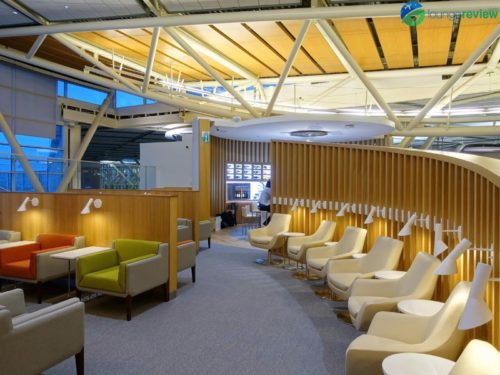 The west wing is home to the buffet and dining area, with dining tables for four, communal tables, and convenient high-top seating at the periphery. Couples will find intimate dining tables for two in the bridge linking the two wings. 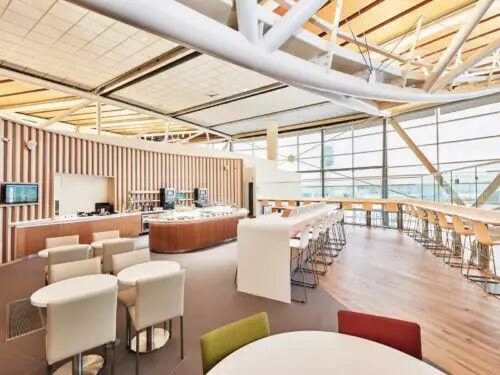 Upon entering, guests are greeted by the sight of the wine bar, a convivial and architecturally-striking space with a horse-shoe shaped bar in front a curved backdrop made of natural wood. The area doubles as a social hub and as a tasting room, with plans for local wine producers to showcase their products on a regular basis. On most days, however, the bar will not be staffed—patrons may help themselves to a rotating selection of a dozen wines from automated dispensers. Soft drinks, juices, espresso, and a selection of microbrews are available in the dining area, as well as a somewhat minimal liquor selection. 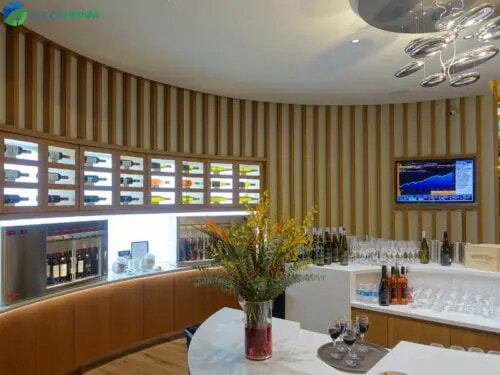 With direct service both to Asia and Europe, Vancouver airport sees a diverse population of travelers, and the buffet spread aims to satisfy passengers at the cross-roads. The food is locally sourced, with an emphasis on fresh local produce such as smoked salmon, healthy items such as salads, a couple of Western-style hot entrees, and an appetizing dessert selection.

In addition, SkyTeam offers a noodle bar, with a variety of cooked-to-order Asian specialties including noodle soup with fish balls, wonton soup, shrimp dumpling, and pork dumpling. The noodle bar does away with the traditional buzzer in favor of a more modern SMS-based notification system—a great idea in theory, though some passengers may prefer to avoid expensive messages while traveling abroad. 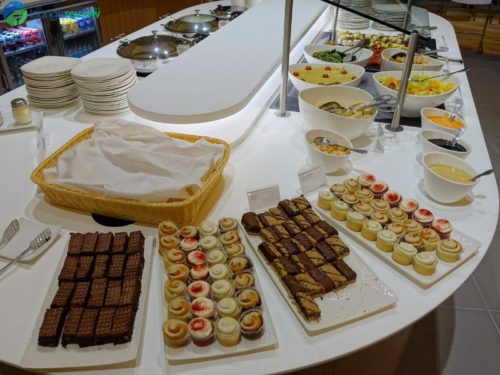 The business center, also an architectural highlight, features a computer, a printer, and comfortable work spaces with ergonomic chairs. Complimentary Wi-Fi is available throughout the lounge. 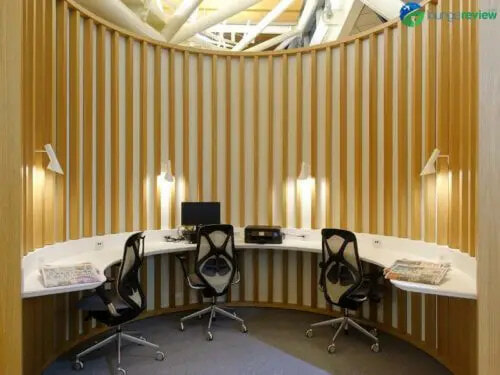 Two over-sized shower suites equipped with a sink, a large walk-in shower, a toilet, towels, and bath amenities, round up the offering. 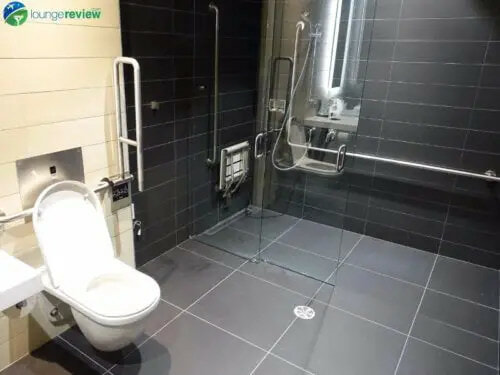 SkyTeam has chosen Global Lounge Network (GLN) as the day-to-day operator of the Vancouver lounge, marking their first collaboration with the Miami-based company. While hardly a household name in the US, GLN has a significant presence in Latin America, with locations in Mexico City, San Juan, and Panama City among others. The company prides itself on delivering polished and proactive service, with strict training standards for all team members, and innovations such as the use of real-time communication devices between staff members.

Staff members are expected to roam the lounge offering food and drinks, and to spot opportunities to delight customers. Team members are trained to work in multiple positions, so the staff can be re-allocated based on the needs—for example, at peak times, assuming that there is no line at the reception desk, check-in staff may be called in to help bus tables or assist passengers in the lounge. This concept is radically different from how most lounges work, and allows GLN to be more responsive to customer needs.

The Vancouver lounge joins a growing network of SkyTeam Lounges

Similar to Star Alliance branded lounges and oneworld lounges, SkyTeam lounges are operated by the alliance on behalf of member airlines, typically at locations where there is no “home carrier” despite a healthy business. Vancouver fits the bill, with no member airline that calls British Columbia home, but no less than nine SkyTeam carriers serving the airport, and an even distribution between Asian carriers (China Airlines, China Eastern, China Southern, Korean Air, and Xiamen Airlines) and European and North American carriers (Aeroméxico, Air France, Delta Air Lines, KLM.)

Vancouver airport has also been keen to modernize and improve passenger experience; ground services in the international terminal have been transformed with the recent arrival of the Cathay Pacific Lounge and remodeled Air Canada Lounge. The new SkyTeam lounge is molded in the same vein.

With the opening of the Vancouver location, SkyTeam now operates more alliance-branded lounges than their competitors (Star Alliance operates six branded lounges worldwide, while oneworld has never really invested in the area.) The alliance is mulling over a few additional locations, with as many as four lounges in the pipeline. 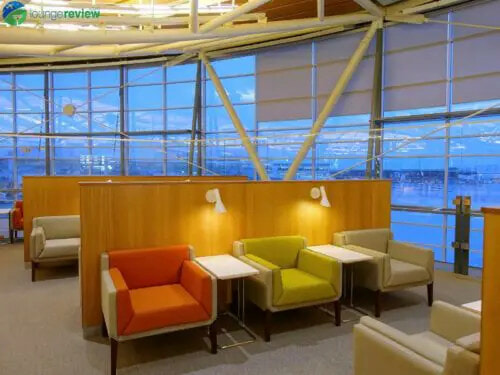 The SkyTeam Lounge at Vancouver airport is located in Terminal D and open 24 hours a day. The club welcomes the following customers:

The arrival of the sleek new SkyTeam Lounge at Vancouver airport marks another milestone in the airport’s transformation. SkyTeam elite and premium passengers now have access to a stylish haven with some of the terminal’s best views, a substantial food selection, and a complete line-up of amenities including a business center and shower suites.

The lounge will hopefully fare well at peak times—the single elevator might be a bottle neck, and a wait list for showers is not unlikely—but the operator’s focus on service should help mitigate any challenges.