The United Polaris Lounge expansion at Chicago O’Hare opened without any fanfare, just as the original space celebrated its one-year anniversary. The club, despite its elegant design and excellent amenities, has received mixed reviews—initially praised by customers, it quickly became chronically crowded, highlighting that United had significantly under-estimated demand and space requirements.

The United Polaris Lounge expansion at Chicago O’Hare airport is located in the rear of the lounge, to the left of the bar area, in the footprint of the former United Club near gate C16 which has been vacant for over 18 months. While the space was initially slated to be renovated and re-opened as a United Club, a portion was soon earmarked for a Polaris Lounge expansion in light of emerging crowding issues.

The expansion features the same color palette and finishes as the main area, with shades of grey and blue, and white faux-hardwood flooring. However, unlike the original Polaris Lounge which boasts three floor-to-ceiling window walls and some of the airport’s best tarmac views, the expansion is a dimmer space, with little daylight. United has relocated the restaurant area there, thus opening prime seating by the windows formerly dedicated to table service to all guests. 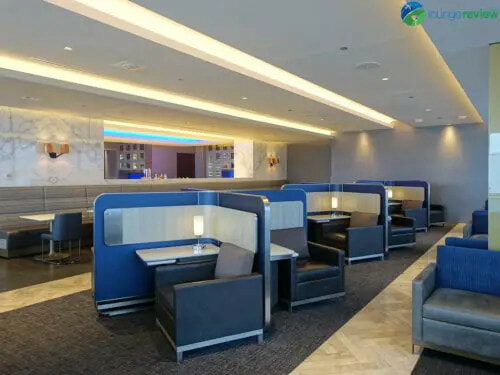 Notice the rear wall in the original United Polaris Lounge… 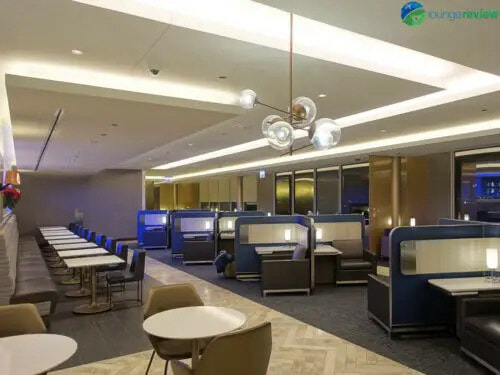 Full-service, restaurant-style dining has been a hallmark of the Polaris Lounge, but the original floor plan lacked a formal restaurant area: the service was offered in the vicinity of the bar at a dozen tables, of which a few were situated in the center of the lounge and lacked privacy. 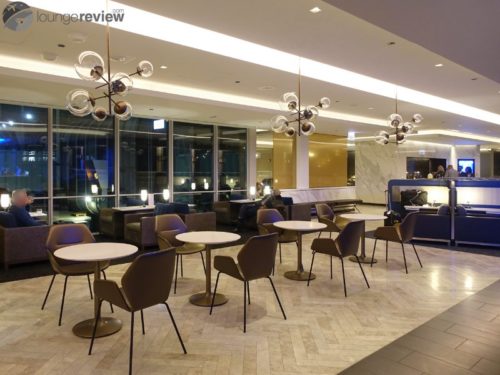 The opening of the new expansion brings a new dedicated room outfitted with highly private booths for one or two guests, as well as tables for larger parties. Dim and cozy with subtle light accents, the new space is much better suited for a restaurant, and allows the staff to roam between tables more freely. 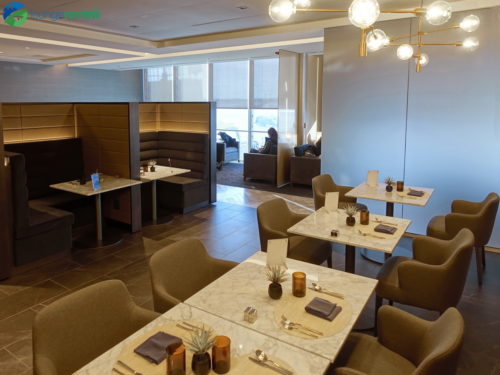 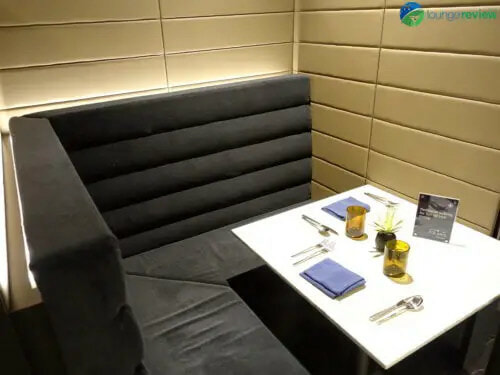 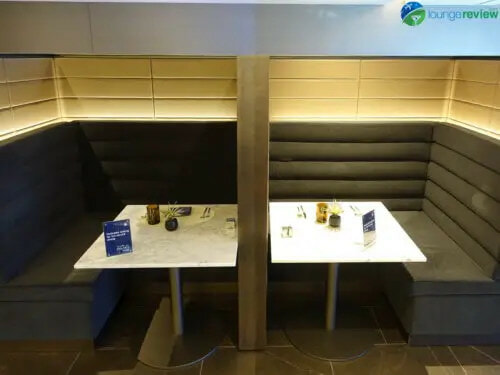 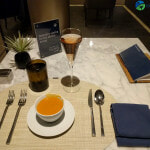 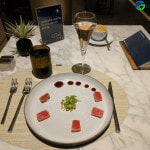 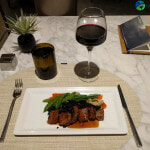 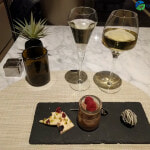 At the rear of the Polaris Lounge expansion is a new seating area. The seats are all outfitted with a signature marble side table, power and USB outlet, and an individual lamp. While comfortable and well-appointed, the space was visibly designed as an after-thought and as overflow. The bland monochrome color scheme, limited daylight, and uninspired layout are a far cry from the cachet of the main area. The Polaris Lounge tends to fill up mid-afternoons but is otherwise relatively quiet; the space therefore is likely to remain lightly occupied the rest of the day. 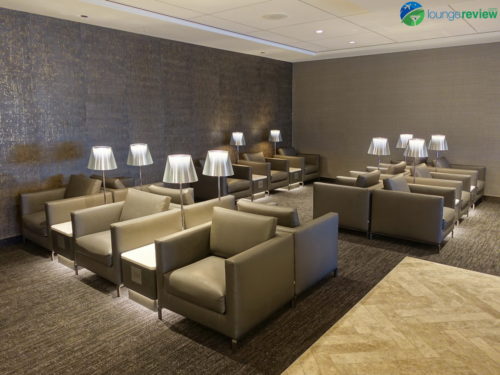 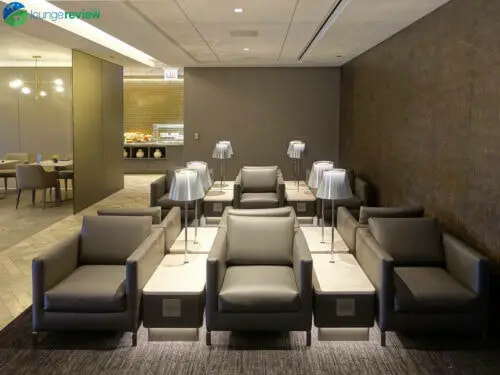 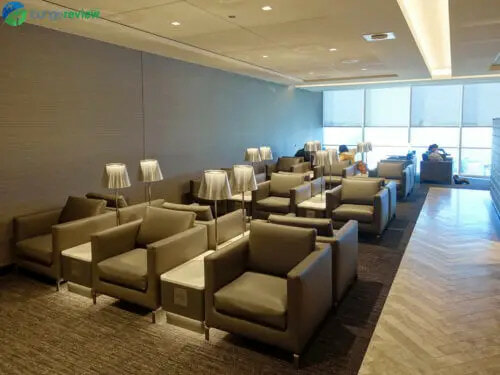 Adjacent to the seating area is a new buffet zone with an hydration station, two espresso machines, fruit, and an assortment of snacks and nibbles. The main buffet remains located off the main seating area. 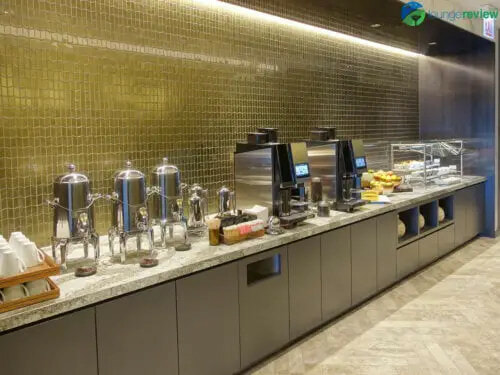 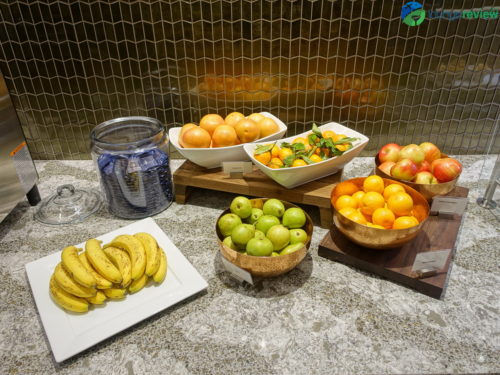 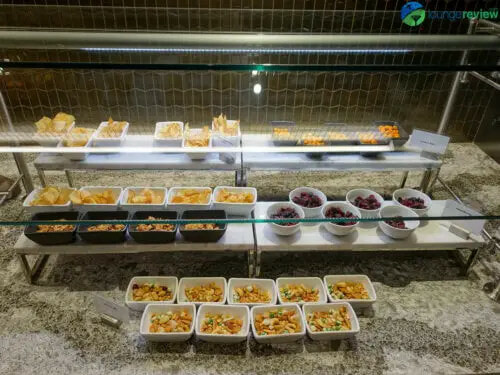 The expansion of the United Polaris Lounge at Chicago O’Hare should permanently mitigate or resolve the crowding issues that have plagued the club since its opening, and restore the shine on what is ultimately an outstanding business class ground product.

The new seating area is more functional than genuinely attractive, but the adjacent food and beverage serving area is a nice touch. The new restaurant zone is a significant improvement, with intimate booths and all-around true restaurant vibe. The relocation of full-service dining also frees up prime additional seating in the main room.

With the opening of the Polaris Lounge expansion, plans to modernize and re-open the unused portions of the former adjacent United Club can now proceed in earnest. The space is currently being renovated, with construction expected to conclude this winter, barring additional delays.

Unfortunately, to this date, the United Polaris Lounge at Chicago O’Hare airport remains the only Polaris Lounge system-wide. The global roll-out of the Polaris brand, launched with great fanfare late 2016, has been plagued with massive delays. Not a single lounge opened in 2017, and only three additional clubs in San Francisco, Newark, and Houston, are currently under construction and slated to open in the summer at the earliest. Additional clubs are unlikely to materialize before 2019.