It seems like the slow roll-out of Polaris, United’s re-imagined intercontinental business class product, is starting to feel like a distant memory. The airline has picked up a healthy pace over the last few months, introducing a newly-configured aircraft with flat beds and all-aisle access every 10 days, and opening new lounges like clockwork.

On the heels of the opening of flagship Polaris Lounges at San Francisco and Newark airports, the carrier unveiled today the Polaris Lounge at Houston Bush Intercontinental airport.

This morning, guests and members of the press gathered for a preview of the new club and a first taste of its elaborate food and beverage offerings. Over the next two days, select MileagePlus members—who have purchased access for a scant 2,500 miles—will flock to the lounge to sample its amenities and complimentary restaurant-style dining service.

When the Polaris Lounge opens to the public on Friday, June 29th, a long-haul business class ticket on United or a Star Alliance partner airline will be the only way to get in, regardless of airline status or memberships.

The United Polaris Lounge at Houston Intercontinental airport is situated in Terminal E between gates E11 and E12, on the top floor reclaimed from the United Club. The staircase that once connected the second and third floors has been demolished and built over, allowing the United Club and new Polaris Lounge to function as standalone entities with separate entrances.

On the concourse level, a marble-clad lobby greets patrons with an elegant back-lit desk, high-end finishes, and a light fixture evoking seven constellations (a near replica of the Polaris Lounge Newark piece.) 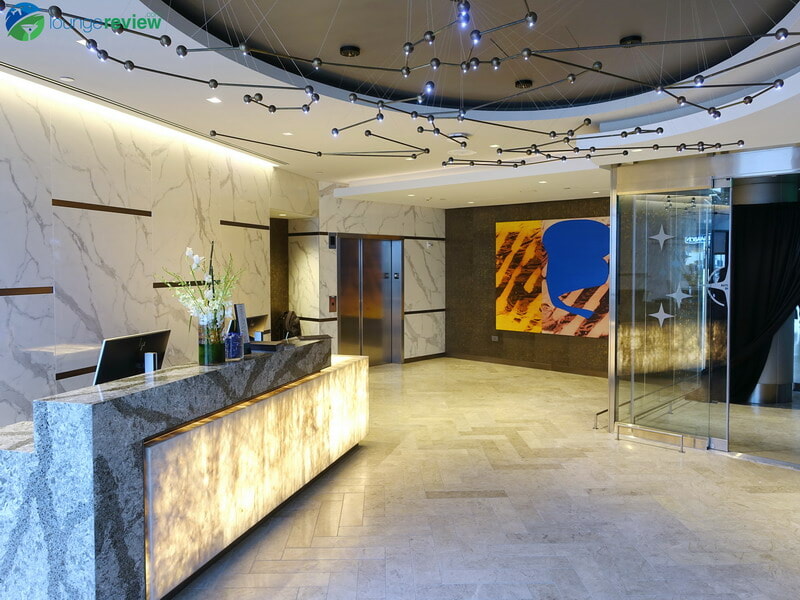 An elevator whisks guests to the lounge, though it’s unfortunate that there is no staircase except in emergencies, as a line might form at peak times. 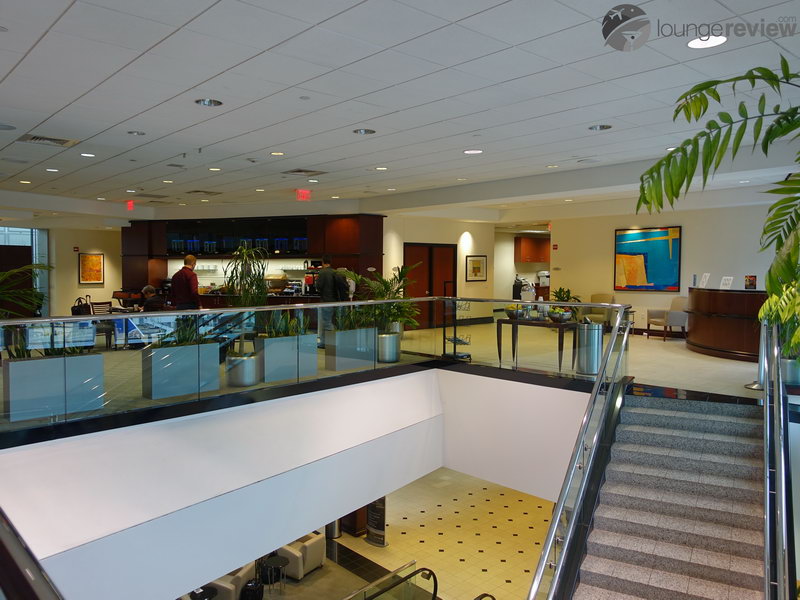 At 15,528 square feet—less than half the surface of its San Francisco and Newark counterparts—the Houston location is the most compact Polaris Lounge so far. But don’t call it small—the airline prefers affectionate or trendy terms such as “boutique” and “intimate.”

Indeed, while visually the United Polaris Lounge at Houston airport is a faithful sibling of its predecessors, the designers have stayed away from the open space concept, preferring smaller “rooms” that are less grandiose, feel more residential, and contribute to the boutique vibe. 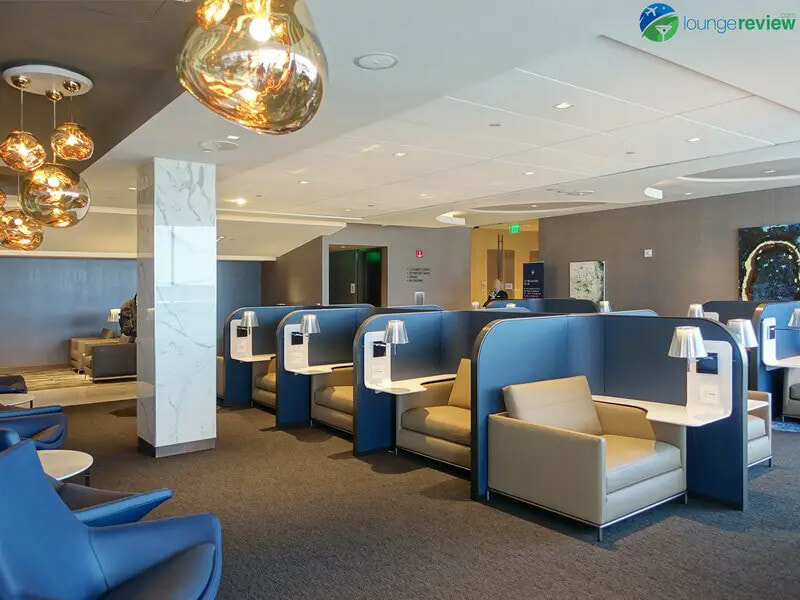 On paper, the numbers add up. Despite being a major hub, Houston has relatively few intercontinental routes. The airline expects to host up to 150-170 customer at peak times, typically early in the mornings and in the evenings—a comfortable fit for the lounge’s 191 seats. However, there is relatively little buffer in the event of irregular operations.

The Polaris Lounge boasts floor-to-ceiling windows with sweeping views of the tarmac and runways, as well as a bird’s eye view on the concourse atrium. The partitions are designed to enhance privacy without impacting light flow. 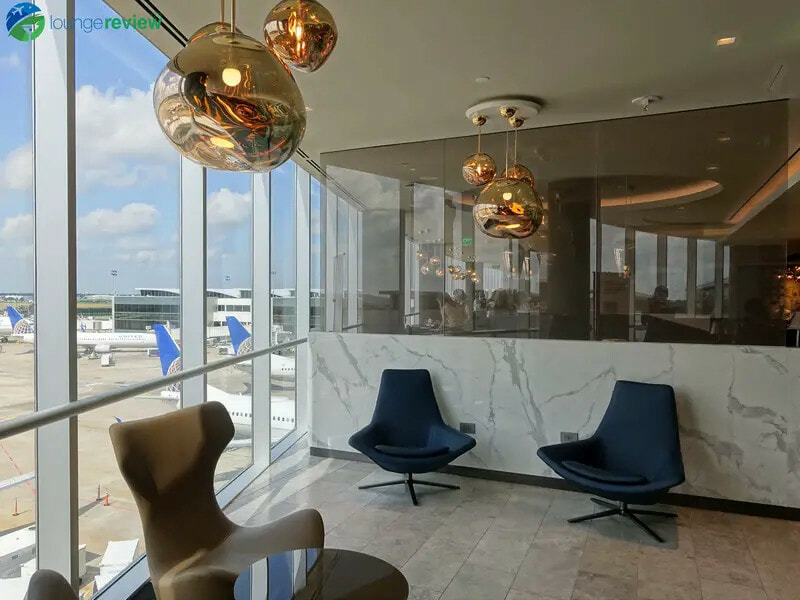 Guests have their choice of over 10 types of seats, all outfitted with one or more USB and power outlets. 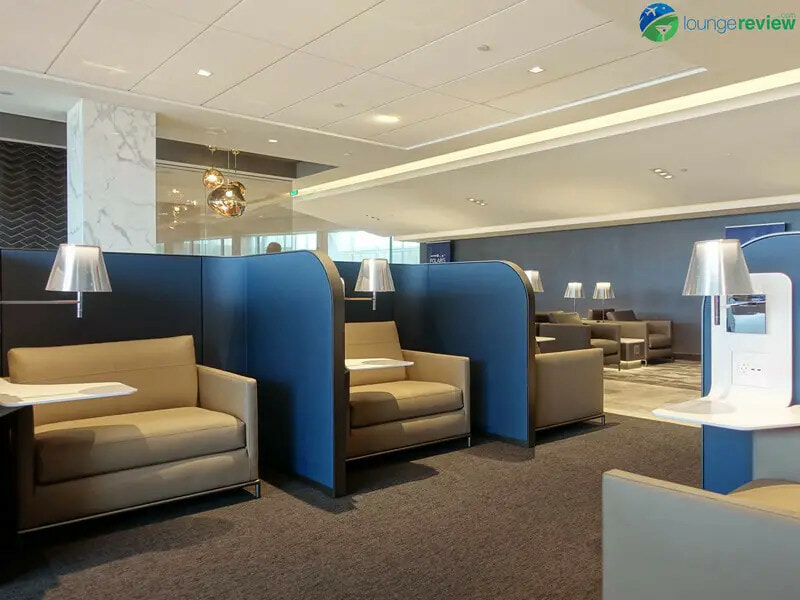 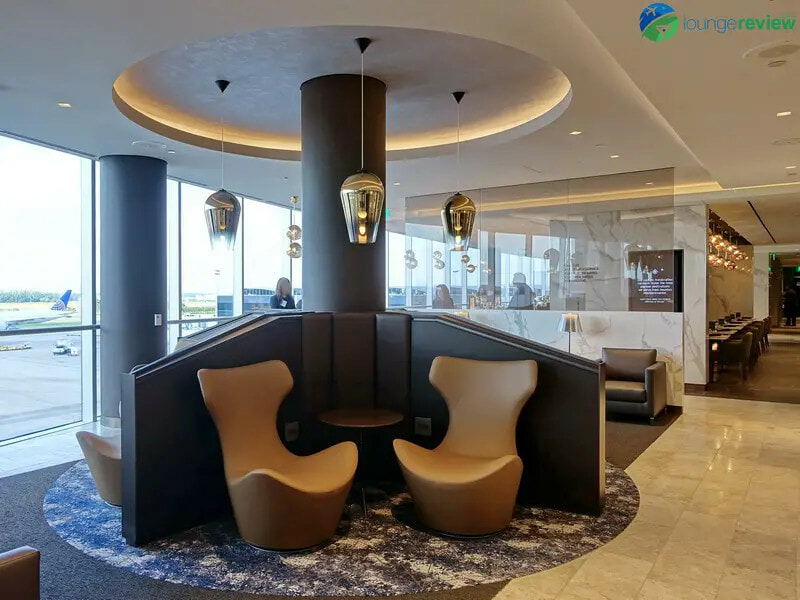 … while other options include dining tables, couches, and traditional lounge seating with side tables and individual lamps. 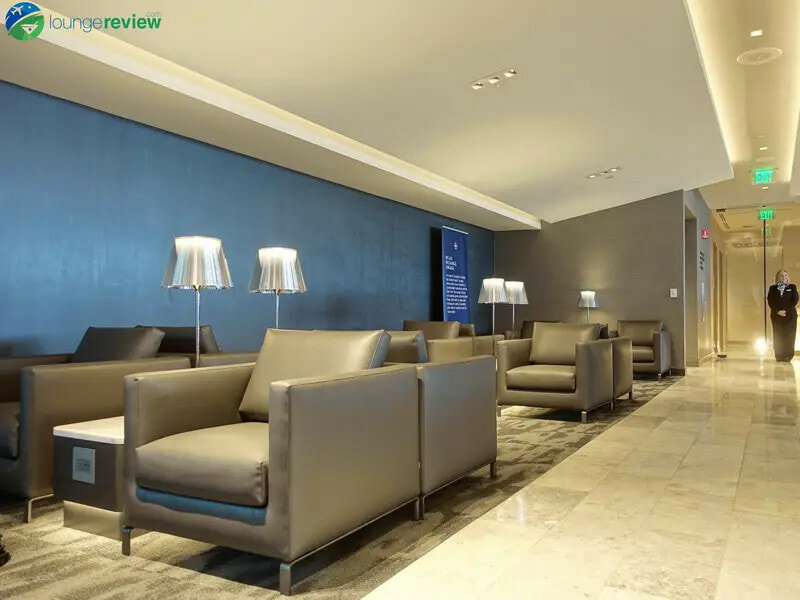 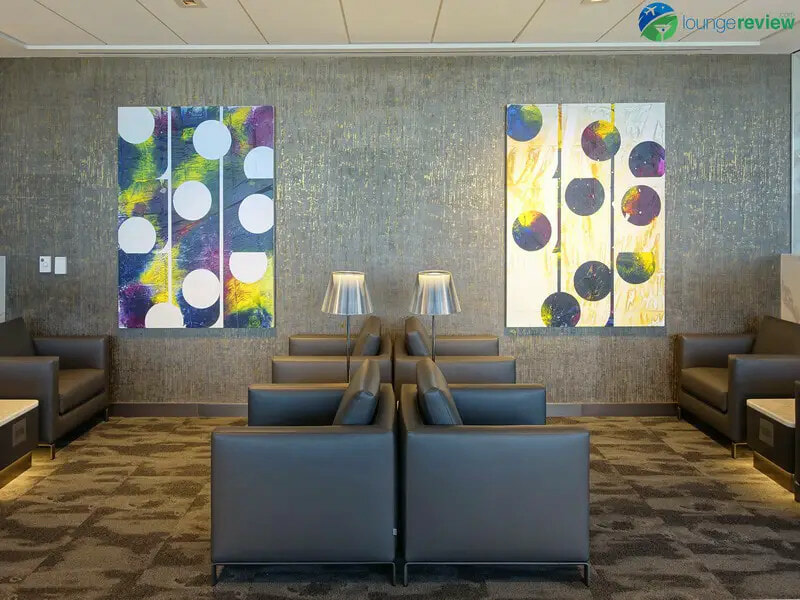 The custom-designed buffet area sports a residential look, with shelves and a bookcase. Behind the apparent simplicity and homeliness of the decor lies an invisible high-tech setup: the hot buffet uses induction to keep dishes warm, while the cold buffet has a built-in frost top. 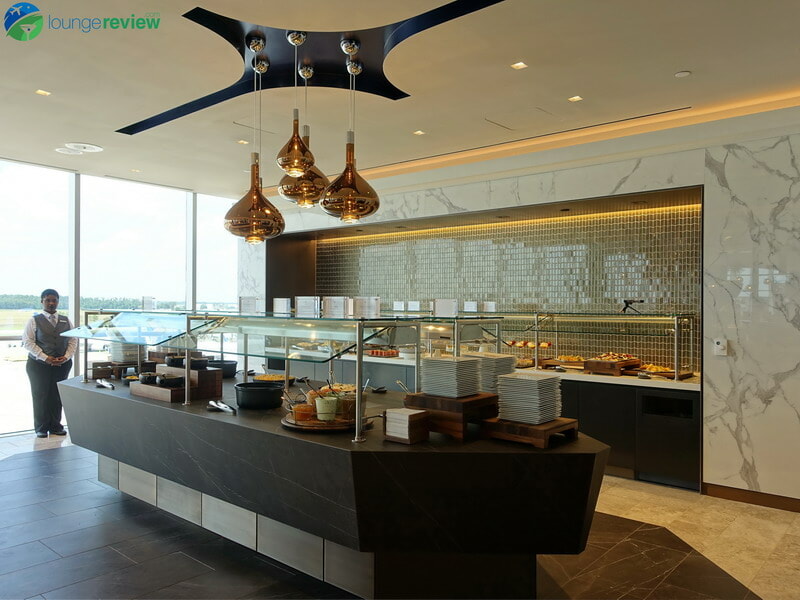 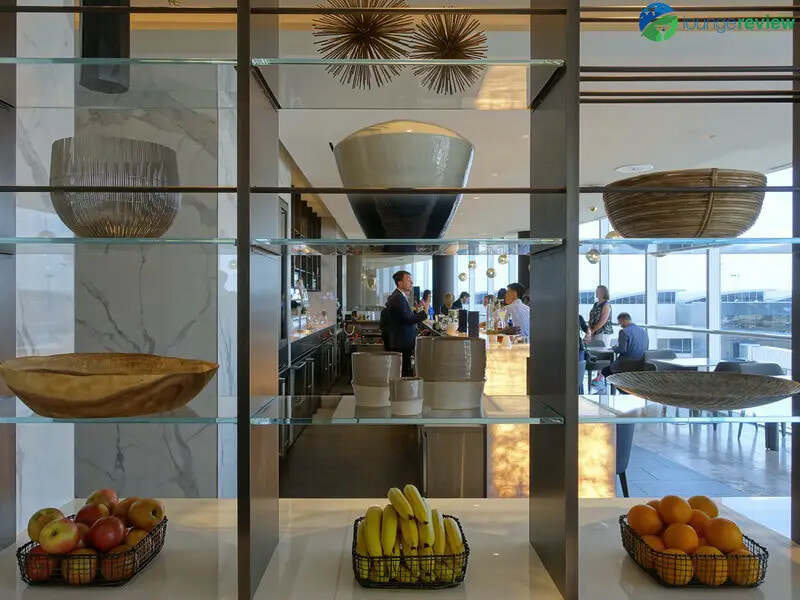 Food and beverages at the United Polaris Lounge Houston

The dining experience is at the heart of the Polaris Lounge concept. At Houston Intercontinental airport, United emphasizes breakfast and dinner in order to accommodate early arrivals and late night departures.

The buffet features a cold and hot spread with a Texan and South American flair. The selection includes Brazilian empanadas, Argentinian picadillo stew, Cilantro rice, and a Chipotle mac and cheese casserole. The breakfast menu is inspired by European trends, with baguette, cheese, and mustard.

Luxury reaches the pinnacle with a complimentary full-service a-la-carte restaurant available to all guests on a first-come, first serve basis.

The posh space features 14 tables with seating for 28 patrons, and offers an adventurous menu with highlights such as a Texan hash skillet for breakfast, a chilled gazpacho, Argentinian roasted chimichurri chicken, and Cajun andouille sausage and chicken etouffee. Rest assured, the popular Polaris Burger is also on the menu, as well as all-time favorites such as chicken quesadillas, and a selection of desserts including tres leches bites and lemon curd.

The lounge employs a full-time culinary team. Global caterer Sodexo coordinates both food preparation and customer service. Frequent flyers will be greeted by familiar faces—some staff members used to work at the United Club, while others hail from the popular American Express Centurion Lounge. 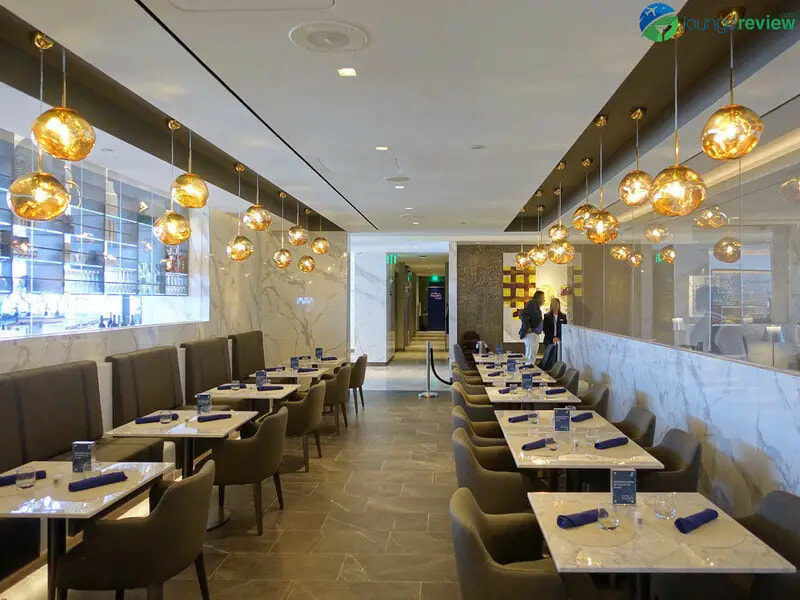 The beverage selection boasts 14 international wines from Europe, Israel, Argentina, and the US; an Italian Prosecco; a French Piper-Heidsieck Cuvee Brut Champagne; beer on tap; and a generous assortment of liquors and spirits. 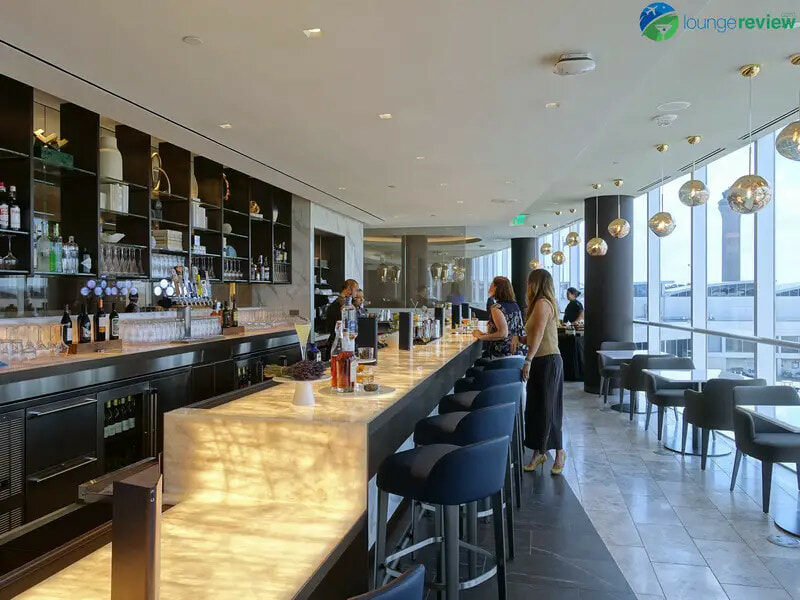 The cocktail selection favors locally-sourced and house-made ingredients. The Polaris team prepares their own lavender syrup, anise-infused vodka, and oolong tea-steeped bourbon. The signature cocktails celebrate the multi-cultural horizons that dominate the Houston bar scene, with the Caliente on the Rocks, a margarita with homemade sour mix which can be enjoyed as spicy as desired, and the caipirinha, a Brazilian drink crafted with muddled lime, sugar, and cachaca.

United’s signature Paper Airplane (served with a clipped-on paper airplane on a Polaris-branded coaster), the Polaris Old Fashioned, and the United Polaris Star, a star-anise infused vodka with Dolin Blanc and Dolin Dryn, are also on the menu. 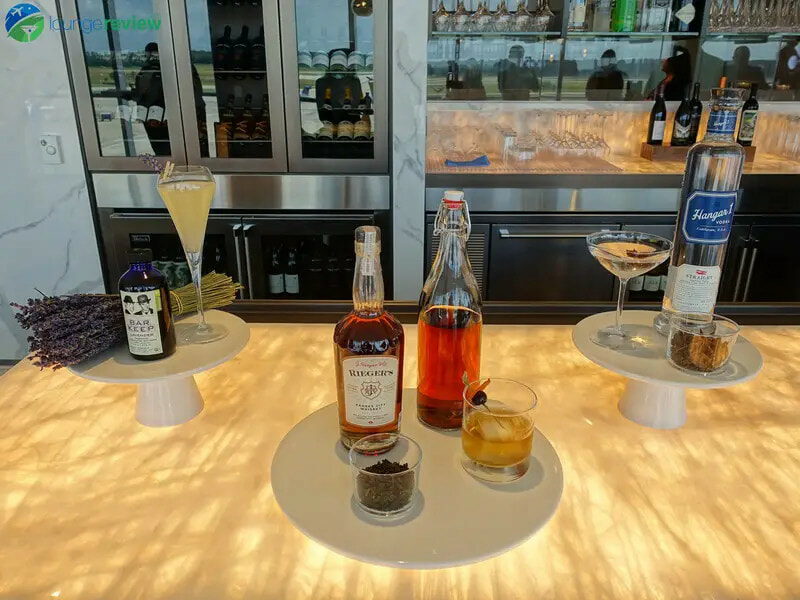 Whether you’re feeling less adventurous or more creative, the bartenders will be happy to craft the drink of your choice. Horizons go beyond alcoholic beverages: the bar is equipped with a high-end espresso machine. 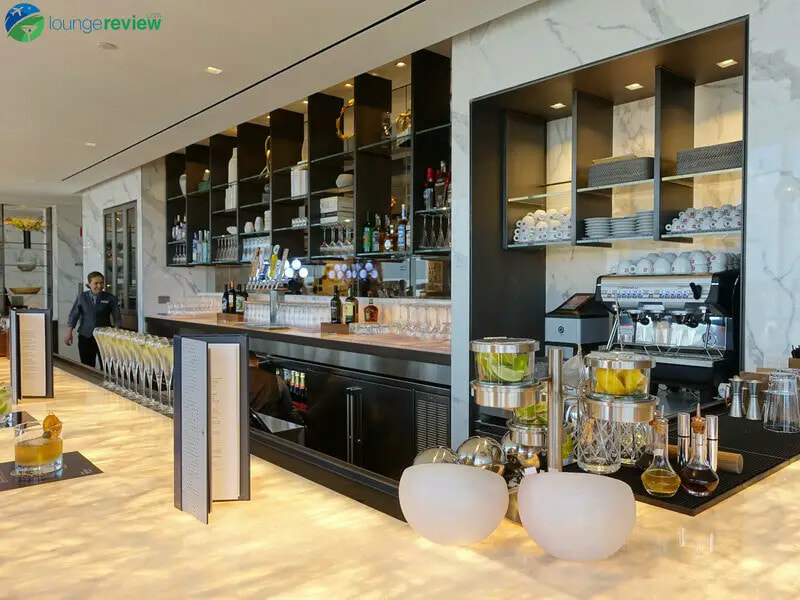 Soda, juices, infused and bottled water, tea, and espresso are available for self-service in coolers in the buffet area. 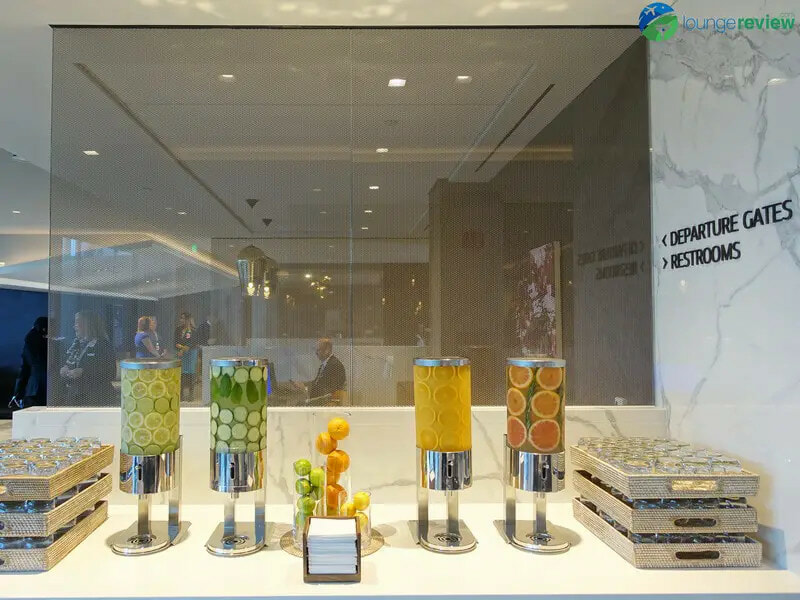 Showers and relaxation at the United Polaris Lounge IAH

The United Polaris Lounge at Houston Intercontinental airport features six spacious and elegantly appointed shower suites outfitted with a rain shower, slippers, heated Saks Fifth Avenue-branded towels, Cowshed Spa bath products, and handy power and USB outlets. The high number of showers relative to the dimensions of the lounge aims at accommodating the five Polaris arrivals in the morning, as well as anticipated demand ahead of late-evening flights to Sydney and Tokyo-Narita.

Amenities such as combs, toothbrushes, toothpaste, shower caps, curling irons, and shaving kits are available upon request. United also offers clothes pressing service: hang your clothes through the double door, ring the bell, and your items will be promptly returned to you while you freshen up. 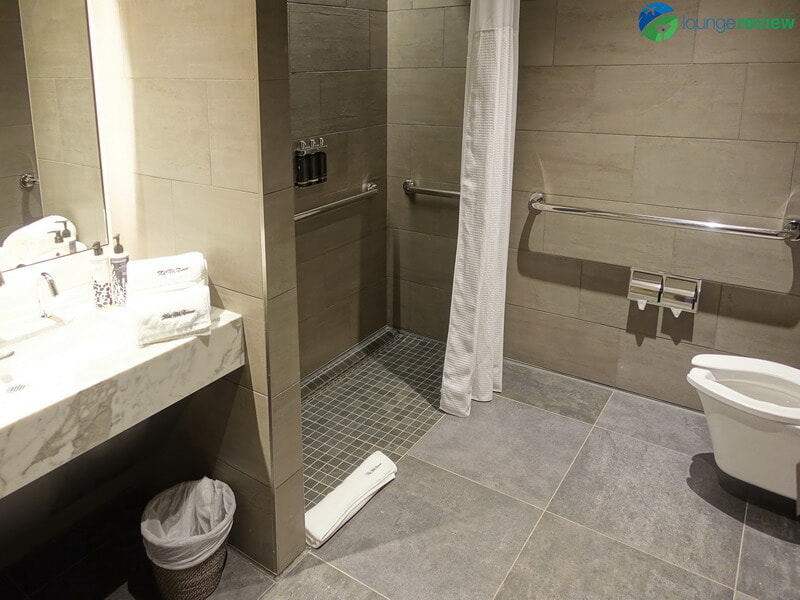 Adjacent to the shower rooms are two semi-private quiet suites featuring a daybed, eye masks, ear plugs, Saks Fifth Avenue-branded pillows and blankets, and a white noise machine. The design aims at striking a balance between comfort and efficiency: while relatively private and quiet, the suites lack doors, and their location in front of the windows is not especially conducive to sleep.

The showers and quiet suites are available on a first-come, first-serve basis. We recommend inquiring early should their be a wait at peak times. 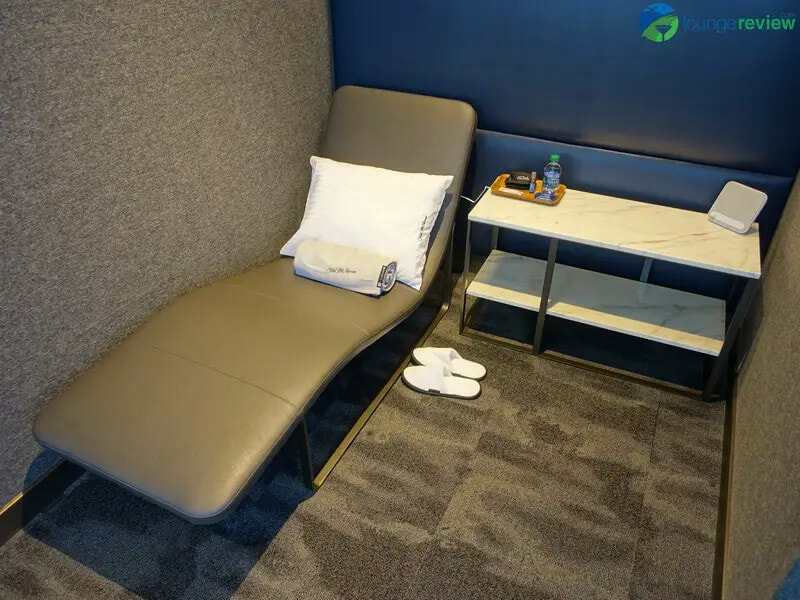 In lieu of traditional public bathrooms, the Polaris Lounge sports generously-sized individual all-gender stalls equipped with a toilet, a sink, an ottoman, and plenty of room to change or freshen up.

First Class passengers are permitted to bring one guest.

The Polaris Lounge is off-limits to United Club members and Star Alliance Gold customers traveling internationally in economy, who may use any of the five United Clubs at Houston Intercontinental. 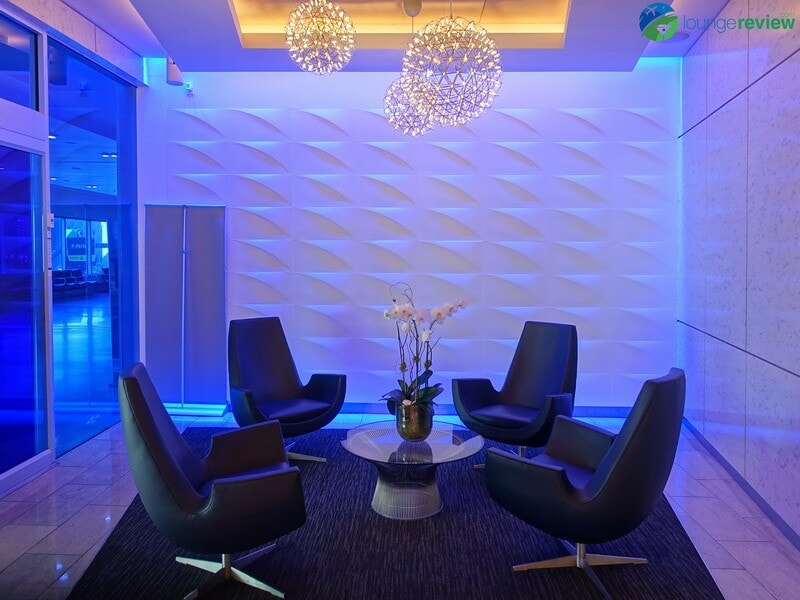 Despite its intrinsic qualities, the design of the Polaris Lounge Houston reveals a few trade-offs due to space constraints. The two daybeds are a token amenity, the lounge lacks phone rooms, the elevator-only access is likely to be a bottleneck, and the lounge may be crowded when delays occur. Yet, there’s lots to love about the overall decor, the balance between space efficiency and privacy, the tarmac views, the six shower suites, and the full-service restaurant, which position United a notch above the competition in the US and European markets.

For Star Alliance Gold passengers traveling in economy and United Club members, the situation is a mixed bag. While the opening of the Polaris Lounge should help mitigate crowding at the airport’s five United Clubs, showers are not available anymore, and United is not planning any renovations in the next two years (though the United Club in Concourse C North near gate C1 was remodeled a year ago.)

Up next, presumably in November, is the opening of United’s fifth Polaris Lounge at Los Angeles airport, in the footprint of the former Global First Lounge/United Club above gate 73. The Polaris ground experience will then be available to 75% of customers departing from the US. Washington Dulles and international locations will not open before 2019 or early 2020.