The lounge world is abuzz with so many new and renovated lounges over the last two months that it’s hard to keep track! We’re here to help you catch up. We’ve already reported on the new British Airways Galleries Club and Concorde Bar in Singapore, Delta Sky Club in San Francisco, and EVA Air Lounge in Bangkok…

But wait, there’s more! Here’s a brief overview of the new lounges that recently opened around the world.

Earlier this year, American Airlines moved out of Sao Paulo airport Terminal 2 and shuttered the Admirals Club at their former home. This week the carrier finally unveiled a new Admirals Club in Terminal 3, which is proving to be a significant upgrade over the contract lounge that filled the gap during construction.

Located on the third floor of Terminal 3 above the duty free area, the new lounge features American Airlines’ new design premiered in Chicago, which will be eventually rolled out worldwide. The lines are clean and modern, with a predominance of white and soft tones. As expected from a new club, power outlets and USB ports are widely available throughout. The setup emphasizes privacy, with a spacious layout and a side tables by every seat. 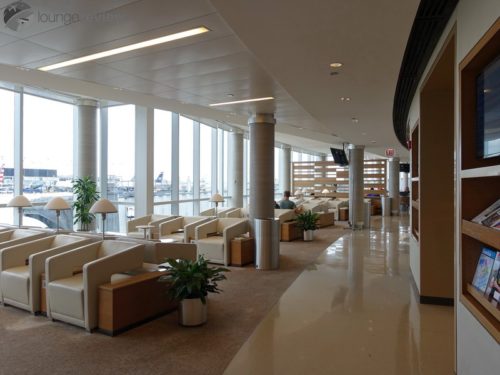 A buffet offers snacks, salads, hot entrees, and desserts — a substantially more generous offer than patrons have come to expect from domestic clubs. Self-serve wines and liquor are available.

Well appointed shower suites come with a rain shower and bath products. Other amenities include a kid’s play room, a business center with self-service computers, and newspapers and magazines.

Overall, while the new Admirals Club looks elegant and functional, a major downside of the location is the lack of windows and thus daylight. The nearby new Star Alliance Lounge might have the edge, thanks to its beautiful design with a local flair and panoramic views.

Melhores Destinos has the first review (in Portuguese) of the new Admirals Club Sao Paulo with pictures.

The new lounge is firmly in line with Plaza Premium’s typical offering. The design features mood lighting, signature chairs, and honeycomb seating. All passengers, regardless of airline and class of service, have access for a fee; and members of popular lounge access programs such as Priority Pass are also welcome.

The food and beverage selection is a highlight with hot meals, a large liquor selection, and barista service. 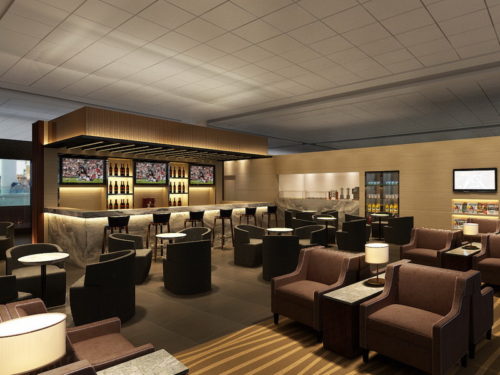 Two weeks ago, Air New Zealand opened their new flagship Koru Lounge at Auckland airport. The design, conceived by Californian firm Gensler, builds upon the décor of the airline’s new acclaimed lounges in Sydney and Los Angeles — the latter is familiar to many of our readers, since it is branded and operated as the Star Alliance Lounge LAX.

The new Koru Lounge in Auckland benefits from plenty of natural light as well as views of the tarmac. Should airport views not cut it, large digital screens display imagery of New Zealand, and monitors above the bar show changing sky scenery.

Air New Zealand has placed an emphasis on the food beverage selection with food cooked to order in an open kitchen, a cocktail bar, New Zealand wines, barista service, and a large buffet offering hot and cold entrees.

Amenities include a media room, a large kids’ area modelled after a Kiwi tree house, an outdoor terrace with a living wall, and shower suites. 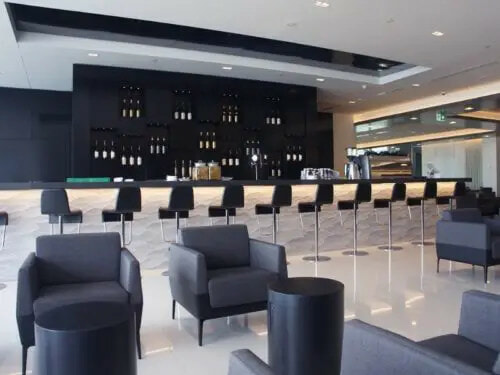 Qantas is expanding at Perth airport. The Australian airline is currently operating out of Terminal 4 but has plans to take over the adjacent Terminal 3 which is connected airside. The increased service has pushed the existing Qantas Club to its limits despite a series of extensions. 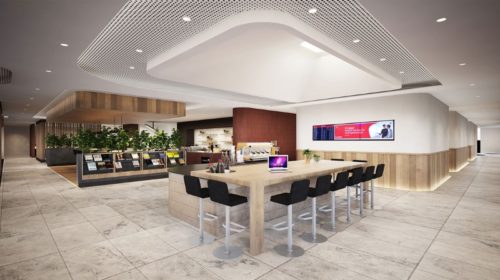 The 1,300 sqm lounge boasts a modern and slick design that emphasizes light, earth tones and indoor plants, in a setting inspired by Western Australian landscapes. Multiple seating areas are conducive to work and relaxation alike. But the food and beverage offering really steals the show. In addition to a generous buffet, patrons may enjoy formal table service and cooked to order food including Italian pizza made on site in an open kitchen. The beverage offering is equally appealing, with a wine bar, cocktails, and barista service.

After a summer of construction and a fun “pop-up lounge” to accommodate passengers on a temporary basis, SAS has completed the renovation of their Business Lounge and Gold Lounge at Stockholm Arlanda airport. The combined facility is now 1,400 sqm, and features a refreshed Scandinavian design.

Both lounges offer showers, a business center, a large buffet area, and meeting rooms. Power outlets are naturally available throughout.

It’s not over! November promises to be eventful as well, with the opening of a new pay-in lounge at Orlando airport: The Club at MCO.