United and Los Angeles World Airports are investing over $400 million in order to renovate and bring their facilities up to the latest standards. The plans filed by United are ambitious: virtually every area, from the check-in zone and security checkpoints to the boarding gates, as well as major pieces of infrastructure such as the baggage sorting system, will be upgraded. The bulk of the work will focus on Terminal 7.

The terminals used by United (6, 7 and 8) are indeed in dire need of a makeover, and with major renovations ongoing or already completed throughout LAX, United didn’t have much of a choice if they wanted to remain competitive.

Construction is expected to last through 2015 at the very least. United has provided few details on what travelers may expect in the future, but we do know that a spacious new United Club will be built between Terminals 6 and 7. The northern portion of Terminal 7 will be widened, then two floors will be added, with the new lounge located on level 4 above the existing roof.

The new 29,000 s.f. club will replace the three current lounges, including the 13,025 s.f. United Club in Terminal 7, the 6,000 s.f. United Club in Terminal 6, and the 4,000 s.f. Global First lounge located in the mezzanine of Terminal 7. The significant increase in lounge space is a relief, considering that the current facilities are routinely operating at capacity. However, United has not disclosed any details regarding future amenities – it is unclear if Global First customers will still benefit from a dedicated space (although there are rumors of a Global Services reception area) or if showers will be added. We hope that United attempts to remain competitive with their Star Alliance partners operating from the Tom Bradley International Terminal, where passengers enjoy beautiful new lounges including a Star Alliance lounge with superior amenities and a First Class area.

Before things get better, they will get significantly worse, as the current lounges will start closing before the new facilities open. 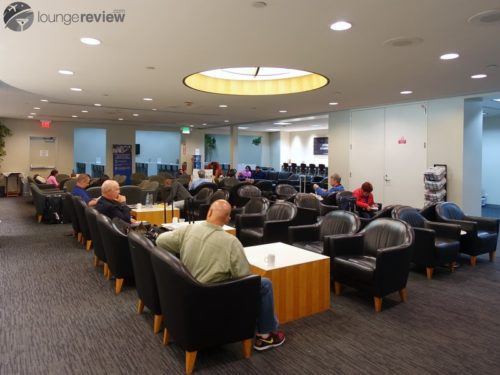 United Club – Los Angeles, CA (LAX) by gate 71A. Not our idea of luxury

We have been pretty impressed with United’s new facilities in San Francisco, Boston and London and the new lounges. It is unclear what fate the airline reserves for LAX. If only there was a way to walk over to the Tom Bradley International Terminal while staying airside…