The limits of Emirates’ ambitions seem to be boundless. Since its modest beginnings in 1985, the airline has experienced such a dramatic growth that it currently ranks as the fourth largest airline in the world in terms of number of international passengers carried.

A tangible measure of Emirates’ expansion is the growing footprint of Dubai International airport (DXB.) The airport is the third busiest worldwide by passenger traffic, as well as the biggest A380 hub. The original Terminal 1, with its capacity of 15 million passengers, was soon augmented by a second, then a third humongous terminal. Terminal 3, with a capacity of 65 million passengers, features no less of 20 Airbus A380 gates, and boasts the largest – and perhaps most luxurious – lounges in the world. 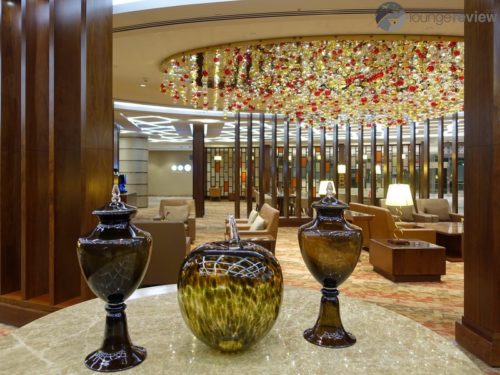 Up until February 2016, Emirates was primarily occupying the modern Terminal 3 (Concourses A and B) with overflow gates in Terminal 1 (Concourse C.) Regional airlines carriers operated out of Terminal 2, while all other airlines were relegated to Terminal 1 Concourse C, sharing the limited real estate with Emirates. The one notable exception was Qantas, who, as Emirates’ code share partner, was co-located in Terminal 3 Concourse A.

With the limitations of Terminal 1, the ground experience for passengers of international airlines was extremely underwhelming, especially at an airport which prides itself in being a beacon of modernity. While Emirates’ passengers would indulge at some of the most extravagant lounges in the world – in Concourse A, Emirates dedicates an entire floor to First Class passengers – passengers departing on other carriers were relegated to cramped shared lounges that were mostly past their prime. 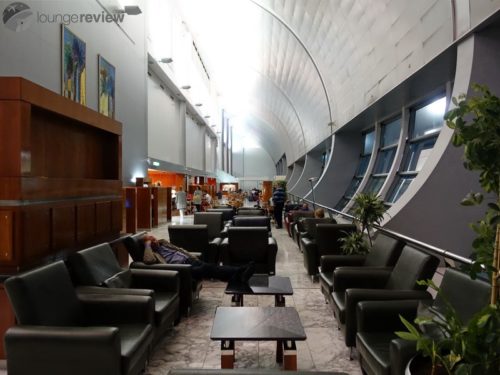 The Terminal 1 Concourse C was the home of the following lounges:

The situation was pretty grim: most clubs were on the small side and operated at capacity. Star Alliance passengers were especially underserved, with access to the Marhaba Lounge, a facility run by Emirates for pay-in economy passengers. 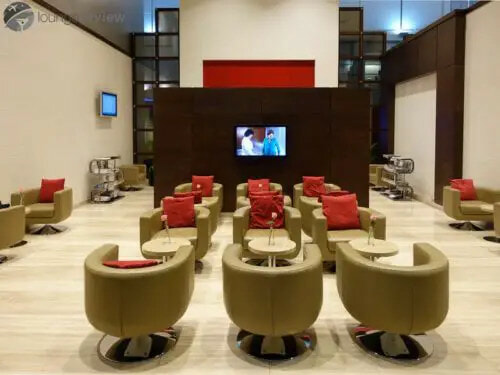 On Wednesday, 24 February 2016, Dubai International Airport celebrated the official opening of Terminal 1, Concourse D, a new extension to Terminal 1, which used to be called Terminal 4 during the early planning stages. The new concourse is linked to Concourse C by an automated people mover.

With the opening of Concourse D, Emirates will take over Concourse C and all other airlines are being relocated to the new concourse. British Airways was the first to move in last week, with Lufthansa following as of today and other airlines soon to walk in their footsteps.

The additional real estate allow the airlines to offer a higher level of service. Three new lounges have just opened at the new Concourse D: a Lufthansa Business Lounge, a Lufthansa Senator lounge, as well as a British Airways lounge. Two additional lounges are under construction: an additional Marhaba Lounge, and an Al Majlis lounge. 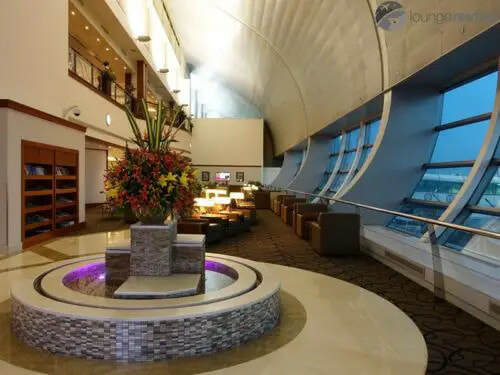 The new lounges stretch over 5,000 sqf. and feature Lufthansa’s latest design with leather seats, earth tones, power outlets throughout, and recliners offering a higher degree of privacy. While the design is not fundamentally different from the design of the former Senator Lounge in Concourse C, passengers will benefit from more space, a less crowded environment, and an enhanced range of amenities including showers.

Catering wise, Lufthansa will continue to offer cold and hot entrees, and a broad selection of alcoholic beverages. 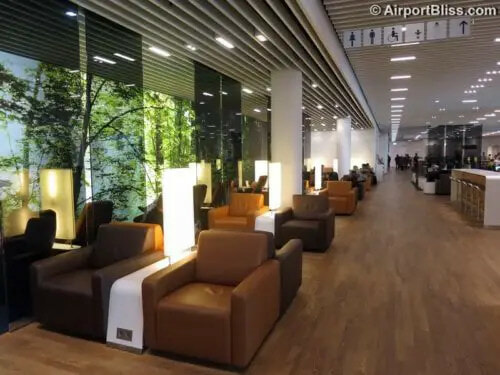 For British Airways and oneworld passengers, the upgrade is perhaps even more significant. The airline has left behind their slightly old fashioned lounge in Concourse C in favor of a swanky new club featuring a resolutely more up-to-date and appealing design. The seating area features a communal table and private recliners with ottomans, along with power outlets at every seat and regional artwork. Unfortunately, though, the only view is on the airport’s shopping area.

In terms of amenities, the main lounge delivers just the essentials, namely a selection of snacks and alcoholic drinks. Unlike Lufthansa, the British carrier does not offer showers or hot meals. 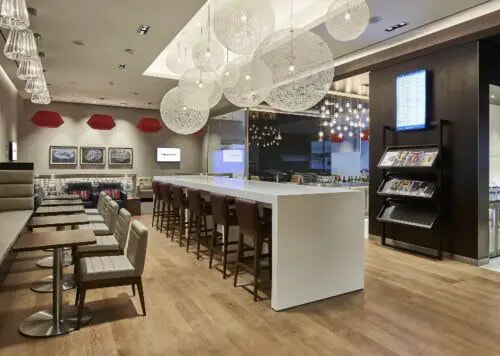 To enjoy a higher level of amenities and services, you’ll want to be flying British Airways First Class or be an Executive Club Gold member, or a Concorde Room card holder: while British Airways doesn’t operate a full size First Class lounge, the new lounge features a Concorde Bar, a concept pioneered in Singapore that the airline intends to roll out over time at secondary destinations where it cannot justify running a traditional First Class lounge.

The Concorde Bar, accessible only with a card key granted to eligible customers, is a space with a completely different vibe, which contrasts sharply with the design of the main space. The posh private room features black Nero marble and European oak flooring, and patrons will enjoy an upper scale food and beverage selection, as well as enhanced privacy.

There’s a silver lining, of course. The Concorde Bar is off limits to top-tier oneworld frequent flyers, which, according to oneworld rules, should normally receive First Class lounge access. Effectively, the Concorde Bar operates just like the Concorde rooms in London Heathrow, New York JFK, and Washington, DC are already the exclusive territory of the airline’s top customers. 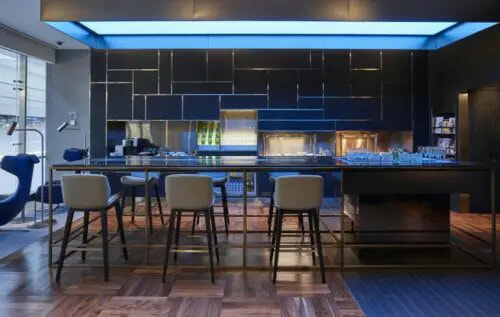 Even though the new British Airways and Lufthansa offerings don’t come close to closing the gap with the Emirates ground experience, these upgrades are significant and make travel to Dubai much more appealing for oneworld and Star Alliance customers.