With little fanfare — their web site has not been updated yet — Star Alliance recently unveiled a new shared lounge in Sao Paulo (GRU.) The opening coincides with the move of member airlines to the new Terminal 3. While the lounge opened a few weeks ago, it is technically still under construction. The space will eventually be twice its current size, and additional amenities such as showers will be offered when construction is completes.

The new lounge features plenty of natural light, a bright and airy design with tall windows — a fortunate complete departure from the legacy standard Star Alliance lounge design — along with a buffet with a selection of snacks, hot and cold items and beverages, and plenty of seating options with power outlets at all seats and USB ports to recharge electronic devices.

The new locally inspired lounge will feature shower facilities, a well-appointed business center, a wide range of seating areas including a quiet zone and a variety of hot and cold refreshments. Today you can already enjoy complimentary amenities such as light refreshments, wi-fi and power outlets with USB connectivity. The lounge will showcase Brazil’s rich design heritage, offering comfortable Brazilian designed and produced seating for 295 guests.

This new facility effectively replaces the former lounges operated by individual airlines, such as the former United Club in terminal 1, which is now closed.

Consolidation can be a mixed bag for passengers: the first Star Alliance lounges worldwide were somewhat unimpressive crowded and cookie-cutter facilities with an uninspired design. After all, the concept was meant to save the airlines money. However, Star Alliance recently abandoned the standard design in favor of more attractive locally inspired designs, and embarked on a series of significant renovations (namely in Los Angeles and Paris.) The Sao Paulo lounge appears to be promising, and is sure to be a step above the dreadful United Club. 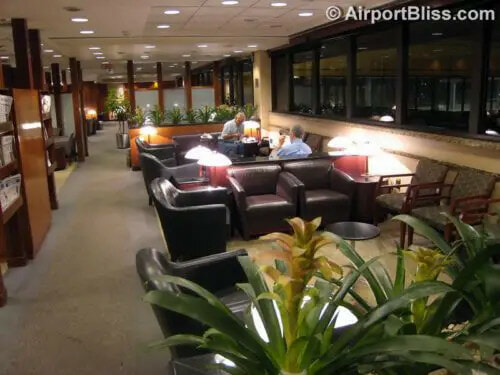 Old United Club, thou shall not be missed!

Coincidentally, the trend in London is just the opposite — as we already reported, consolidation is now over. United and Air Canada, the first airlines to move to the new Star Alliance terminal (T2) both opened beautiful new lounges, with other airlines to follow. The Star Alliance lounge in terminal 3 is now partially closed, and will presumably permanently close along with the Arrivals Lounge when the remaining Star Alliance members complete their move to Terminal 2.

We’re pretty excited for the changes in both Sao Paulo and London, which will significantly improve comfort for Star Alliance passengers.