Munich’s Franz-Josef Strauss Airport, one of Europe’s slickest and most efficient airports with an incredible 30 minute minimum connection time, has just received a significant upgrade.

Back in August, we wrote about the new Terminal 2 Satellite building, which was under construction in collaboration between Munich Airport and Lufthansa. Today marks the end of a long journey: after four years of construction and many months of internal testing – including real-life simulations involving volunteer participants playing the role of passengers – the new satellite has finally opened its doors to the public.

The new satellite adds 27 gates and increases the capacity of Terminal 2, the home of Lufthansa and Star Alliance members, from 11 million to a whopping 36 million passengers a year. The opening should spell immediate relief for operations and passengers: the main terminal building had been operating over capacity, with aircraft often parking at remote positions due to a gate shortage.

The new structure, which was built around the existing control tower, is connected to the main Terminal 2 through an automated train link. All check-in procedures will continue to take place in the main building, though the satellite has its own security checkpoints and transfer facilities, along with distinct areas for Schengen, non-Schengen and arriving passengers.

Munich airport and Lufthansa claim that the CO2 emissions in the new building will be up to 40% lower than in the existing terminals. The modern design will also directly benefit passengers: at the heart of the space is a 7,000 sqm (75,000 sqf) marketplace bathed in natural light, with a variety of shops and restaurants. 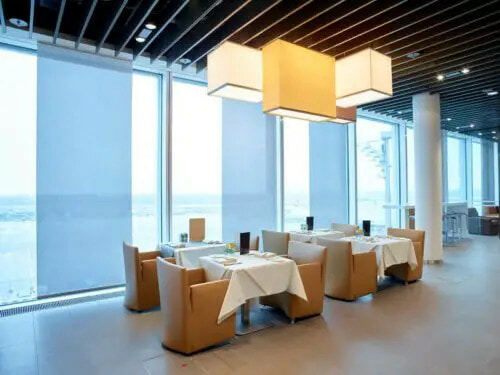 The main terminal 2 building boasts no less than seven lounges. In the Schengen zone, Star Alliance and Lufthansa elite and premium passengers can relax at a Business Class lounge and a Senator Lounge, while the Schengen zone features a Business Class lounge, two Senator Lounges, and our favorite gem: the Senator Café, an elegant, intimate coffee shop that doubles as an oasis of service, exclusively for Miles and More Senator members and Star Alliance Gold passengers. 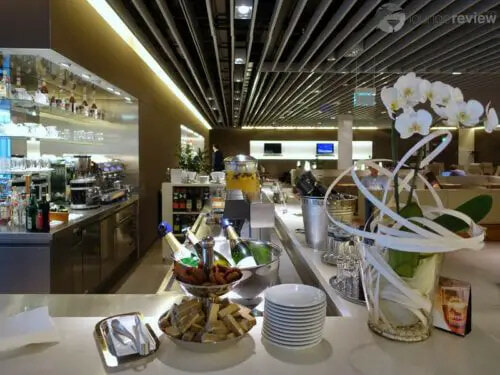 While Lufthansa’s lounges are typically well-appointed, with a generous buffet, barista service, a high-end selection of alcoholic beverages, as well as showers and napping rooms, the Munich clubs have fallen behind their Frankfurt counterparts. The non-Schengen lounges in particular lack natural light and are chronically crowded.

Lufthansa is raising the bar. The airline has dedicated 4,000 sq. m. (over 43,000 sq. f.) to lounges at the new Terminal 2 Satellite building, with no less than five new lounges, effectively doubling the overall lounge space.

Located at the top level, the 1,000 sq. m. (10,000 sq. f.) facility is a replica of the widely acclaimed First Class Lounges in Frankfurt and Munich Terminal 2. Lufthansa’s timeless design remains in our opinion a showcase of understated luxury. The posh seating areas provide plenty of space to stretch out and relax, while the vibrant bar and dining rooms are an invitation to indulge, with a high-end buffet catered by Do&Co and a fine selection of wines, Champagnes, and whiskeys. For the ultimate in privacy, the First Class lounge offers individual workspaces, as well as napping rooms. True to their tradition, Lufthansa also offers a cigar lounge, as well as luxurious bathrooms with bathtubs and the signature First Class rubber ducky, a collector’s item. 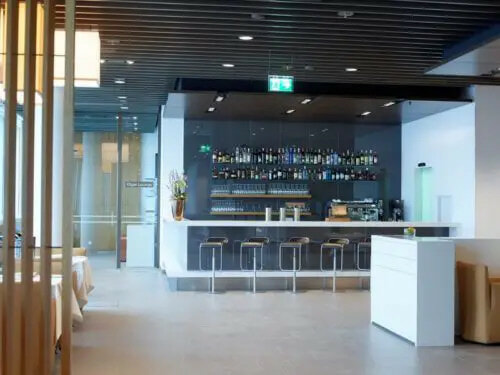 Just like the legacy First Class Lounge in the main terminal building, the new lounge is located at the intersection of the Schengen and non-Schengen zones. Concretely, this means that passengers may enter from either zone, but must relinquish their passport for the duration of their stay. Immigration and departure checks are performed discretely while patrons enjoy the lounge.

Should a flight depart or arrive from a remote position, Lufthansa will spare passengers the bus drive and drive them directly to/from the aircraft in a luxury car. 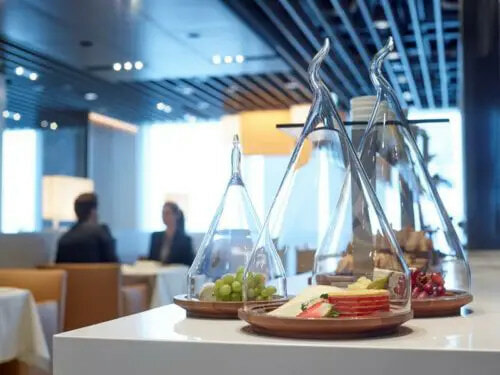 The timing of the opening of the new Lufthansa First Class lounge isn’t without irony. The airline has just quietly rolled out a plan to phase out First Class seating from most Airbus A330-300 aircraft based in Munich. By summer 2017, the routes to Delhi, Charlotte, Montreal, Mumbai, Tehran, Boston, Chicago O’Hare, New York JFK, Washington Dulles, and Miami will all be operating with a three-class configuration with Business Class, Premium Economy and Economy, reflecting market changes.

The new cuts build on a previous wave of significant reductions in First Class capacity system wide, with the recent removal of First Class from Boeing 747-400 and numerous Airbus A340 aircraft.

The new satellite building at Munich airport Terminal 2 includes a pair of Lufthansa Business Lounges and Lufthansa Senator lounges in both the Schengen and non-Schengen zones. The new clubs boast the airline’s latest design, already showcased at Frankfurt and London Heathrow airports amongst other locations.

The Business and Senator lounge spread across 3,000 sq. m. (over 30,000 sq. f.) and feature panoramic windows with dramatic views of the tarmac, though they lack an outdoor deck. 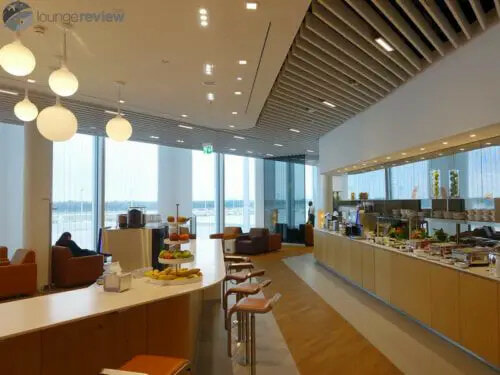 The lounges feature a substantial hot and cold buffet, as well as work areas and shower suites. Power outlets are available at every seat, and Wi-Fi is complimentary throughout. A bar serves specialty coffees and cocktails. 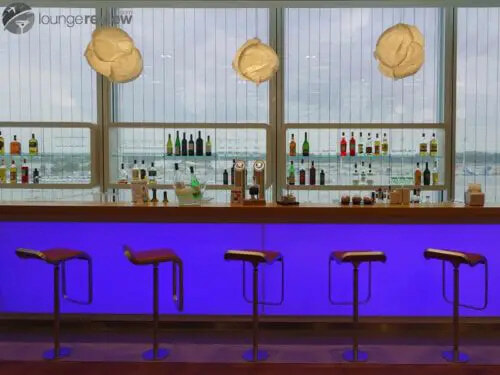 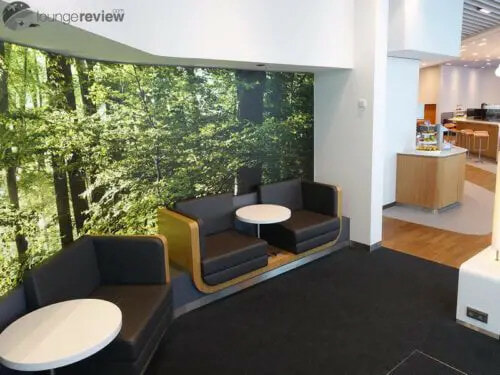 The new Lufthansa Business and Senator lounges are a substantial upgrade over their counterpart over the new terminal building. In particular, the brighter environment and abundant natural light will come as a relief to travelers who cross time zones. Perhaps more importantly, the opening of the new lounges should significantly mitigate crowding and make for a more relaxing and quieter experience.

The Lufthansa Group is firing on all cylinders, with the recent opening of three new lounges in Zurich and today five new lounges in Munich. The five new Lufthansa lounges at the new Terminal 2 satellite building at Munich airport should help relieve crowding at the seven lounges in the main terminal. But the real winners are Lufthansa’s First Class passengers and HON Circle members: the exclusive First Class Lounge experience has become even more intimate with twice the space and a new roof-top deck.

We are scheduled to visit the new lounges this summer and look forward to bringing you in-depth reviews.