Almost four years after the United/Continental merger, the combined airline still operates out of two distinct terminals in London Heathrow. At smaller airports, this is not a huge deal. But at a monster airport like Heathrow, the split operations are costly and cause unnecessary customer confusion.

Relief is in sight — in June 2014, United will be moving under one roof, into the new Terminal 2. A highlight of the move is the opening of two lounges operated by United: a United Club, for business class and Star Gold customers as well as United Club members, plus a Global First lounge for first class passengers as well as Global Services customers.

Few details have trickled about the design of the facilities, but they are expected to look like the new lounges in Chicago (T2), Seattle and San Diego, with an emphasis on white, modern lines, openness, design light fixtures, comfortable seating options, and power outlet availability throughout.

The airline has announced that the facilities would span over 22,000 square feet and would include showers — another welcome development — and feature floor to ceiling windows with views of the airfield.

London Heathrow has lacked great Star Alliance lounge options since BMI exited Star Alliance and their splendid Great British Lounge became off-limits to Star passengers. Most Star Alliance airlines currently use a shared lounge operated by the alliance which is overall rather dim and depressing. United’s new lounges are likely to be an upgrade over the current facilities, although if the traditional fare is served at the United Club, food and beverages might be a downgrade.

United’s decision to open two new lounges in London Heathrow marks a significant departure from the strategy that they had been pursued lately — over the last 10 years, numerous international lounges closed in favor of shared or partner lounges, and First Class lounges closed down as well, sometimes without a substitute. With persistent rumors of a potential long term demise of Global First, the opening of a new Global First lounge is a significant development.

See the United Hub article for additional details on the move to LHR terminal 2. 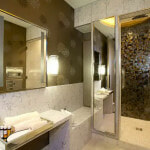