Earlier this year Singapore Airlines announced that it would close its SilverKris Lounge at Hong Kong International Airport from late June through to September 2014 for renovations. Customers were invited to use one of the other Star Alliance options (United Club, THAI Royal Silk Lounge) or the Plaza Premium Lounge.

After a few construction delays, we’re pleased to hear that the lounge will finally reopen on October, 31st 2014, a month behind schedule. 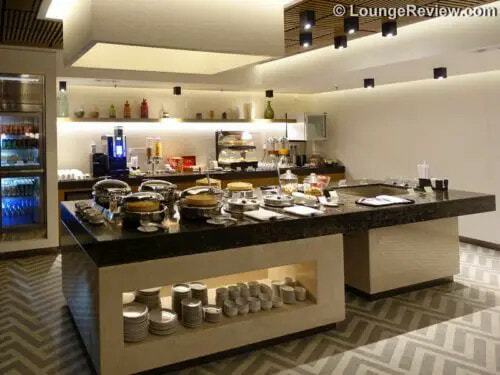 The renovated lounge will feature Singapore Airline’s new “Home away from home” theme which was rolled out earlier this year in Sydney. This new concept, part of a US $79 million improvement plan, will also be showcased at Singapore’s soon-to-open new facilities at London Heathrow Terminal 2 (The Queen’s Terminal), and eventually at their Singapore hub.

The dining options, while already a highlight of the former lounge, should be enhanced too as Singapore introduces their “taste of Singapore” featuring signature dishes from Singapore as well as worldwide cuisine.

It is interesting that Singapore Airlines is placing such an emphasis on their Hong Kong facilities. The former Hong Kong lounge was probably one of the better ones in the system overall, though a few flaws were puzzling – namely the lack of bathroom (and shower) facilities despite the large size of the club, and the odd and dark First class section in the back, with no other amenities than a TV. However, the bar for airline lounges is high at HKG, with both competitors and partners offering some of the best clubs in he world. The airport is home to a series of extravagant Qantas lounges, and even US airlines manage to distinguish themselves – the United Club HKG is one of a kind.

Singapore Airlines has not commented on whether the renovated club would include showers, but we certainly do hope that at least a bathroom will be available. Passengers flying from the US on their way to Singapore would certainly appreciate the opportunity to freshen up. The space itself remains the same, though, by gate 15, and therefore other flaws such as the lack of natural light are unlikely to be fixed.

Over the next few years, Singapore Airlines will be renovating their facilities in Adelaide, Bangkok, Brisbane, Kuala Lumpur, Manila, Melbourne, New Delhi, Perth, San Francisco, Seoul and Taipei. Many are actually inferior to what the Hong Kong club used to be, so this is great news for Singapore passengers. The airline has traditionally delivered exquisite service in the air but could improve on the ground. It may just be turning the corner.