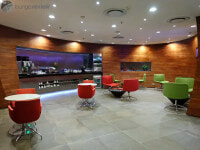 Updated July 2020 Once a haven for the lucky few, airport lounges are gaining in popularity, and are more accessible than ever thanks to a flurry of premium credit cards, affordable membership schemes such as Priority Pass, and an ever-increasing number of pay-in clubs available to all travelers. Arrivals lounges, however, remain relatively exclusive. Seldom […]

On the heels of the launch of their new service between Istanbul, Turkey and Stavropol, Russia, Turkish Airlines announced that they will be opening a network of international lounges. The first location, which opened this month, is at Moscow Vnukovo (VKO) Terminal A. According to atwonline.com, planned future locations include New York JFK, Paris Charles […]