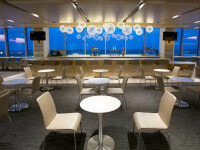 As part of United’s move to terminal B in Boston — which will put an end to their current split operations, a legacy of the United/Continental merger — the airline will soon be unveiling a new United Club lounge. The facility is open to schedule in early May 2014, and will naturally feature the new design […]