Centurion Lounges are visually striking spaces, with a signature living wall, hardwood floors, designer furniture, recessed lighting, and high end finishes. The service is personal and attentive, with personable front desk staff, and servers roaming the room offering drinks and bussing tables. But the amenities steal the show: each lounge offers full hot meals cooked by celebrity chefs, a full bar with a high-end selection of cocktails, superb shower suites, semi-private spaces such as napping pods and cube chairs, and a family room. At the Dallas and Miami locations, patrons may enjoy complimentary massages, while in San Francisco, travelers may indulge in wine tastings. 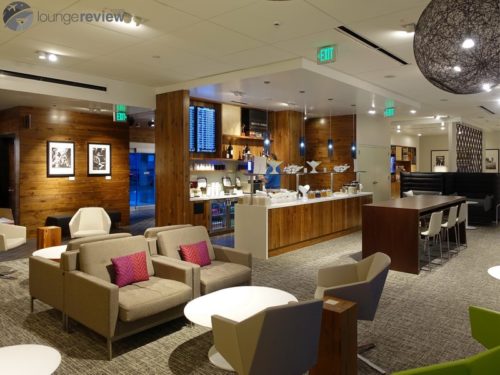 Houston, TX travelers rejoice, the eighth Centurion Lounge will open in the first half of 2016 at George Bush International (IAH). Located in Terminal D, on the former Customs and Immigration level, the 8,500 sq. ft. club will feature the signature Centurion Lounge amenities including full hot meals, a complimentary bar, and shower suites.

The arrival of The Centurion Lounge is bound to shake up the rather dormant Houston lounge scene.

IAH is a major United hub with the airline operating no less than five United Clubs in Terminals A, B, C, and E. But while the United Club at Terminal E used to be the Continental flagship, and the club at Terminal C South features enjoyable shower suites, overall United’s lounges feel dated, tired, and a tad boring. And given the airline’s dominance, Star Alliance partners who operate out of Houston rely on United’s lounges in lieu of operating their own facilities. Air France and British Airways add a little spice to the mix, though their clubs have very limited opening hours.

Fortunately, at Houston George Bush International all terminals are connected airside, making lounge hopping child’s play. The American Express Centurion Lounge will be accessible to all travelers, flying on any airline. If anything, it might, once again, become a victim of its own success and be constantly crowded, although with the construction of new international facilities planned at Houston, American Express is already planning a potential future move to a larger 10,000 sq. ft. space – a testament to their long term commitment to the lounge business. We can’t wait.