Today, United quietly announced a price hike on United Club memberships – the announcement is nowhere to be found on united.com, although the relevant section on pricing has already been updated.

It was a foregone conclusion. United has embarked on an ambitious program to refurbish existing United Clubs worldwide and build new lounges, to the tune of over USD $100 million. New facilities in Chicago (ORD), Seattle (SEA), San Diego (SAN), Boston (BOS) and London (LHR) have already opened, with new lounges in San Francisco (SFO), Los Angeles (LAX) and Atlanta (ATL) in the pipeline. The new clubs feature a modern, open design, with designer furniture including Arne Jacobsen Egg chairs, enhanced lighting, and power and USB plugs at every seat. 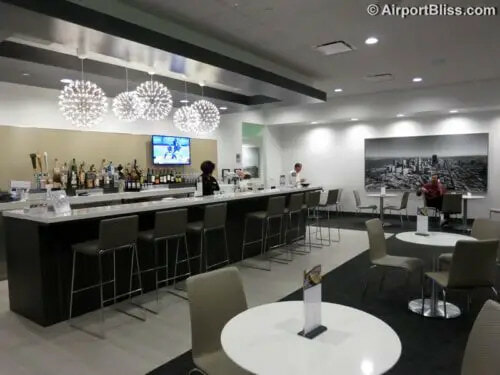 Several existing clubs have already been renovated, including those in Denver (DEN) and Hong Kong (HKG). The nature of the refurbishments varies – in Denver, the club got a complete face lift with a new carpet, new furniture, and power outlets at every seat, while the Hong Kong location, which was already one of the fancier ones, mostly saw a minor upgrade in furniture.

But the kicker is the new food program – United is (slowly) phasing out packaged snacks at domestic locations, in favor of a more varied and nutritious selection including hard boiled eggs, soups, salad, and salami. It was shortly after upgrading their food offering that Delta increased the price of Sky Club memberships – and also eliminated guest access for basic memberships, and United is following in their competitor’s footsteps.

We’ve been working on a variety of improvements to our United ClubSM program based on feedback that we’ve received from our members. To provide a more productive and relaxing experience, we’re investing more than $100 million in renovating existing locations and building new spaces with expanded seating areas, more power outlets and upgraded Wi-Fi. We’re also investing in a brand new complimentary food menu that you can now find at most of our hub locations across the U.S. and will be available soon at the rest of our locations.

To maintain and further improve the United Club experience for our members, we’re announcing the following changes to our membership program:

— We no longer offer a discounted membership for spouses. To add a spouse, an additional $550/70,000 award miles annual membership fee will apply, but only a single initiation fee will be charged for both members.

— Discounts provided to some of our Premier® members will change effective August 18, 2015.

At a first glance, it makes the cost of the Chase United Club Visa card much more palatable – the $395 annual fee now represents a substantial discount over the new membership rates, especially for general and lower-tier members. This might be the silver lining – the price hike may be one component of United’s broad strategy to steer more customers towards their co-branded cards. It’s unclear, however, if Chase is planning on raising the fee, and when.

Reactions to the price hike are likely to be mixed. For anyone whose company foots the bill, pricing is virtually irrelevant. For hub travelers, the potential that the clubs may be less busy down the road — considering that Priority Pass members also recently lost United Club access — is welcome news. For the casual or more infrequent traveler, the Chase United Club Visa card was already the best deal and Chase’s next move (or lack thereof) may mitigate or compound the impact of today’s announcement.

Ultimately, pragmatism probably has to prevail. For weekly flyers, the cost of club access amounts to a few dollars per visit, which simply doesn’t cover the airline’s expenses. If United is serious about improving their product and wishes to continue to operate primarily on a membership basis, then a price increase is hardly unnatural or unexpected.

The question is whether United will really step up its game at hubs. United knows how to operate excellent lounges – the London facilities are top notch. But domestic hubs feel neglected. There is still no word of international-grade amenities such as showers at the planned lounges in San Francisco and Los Angeles, while Delta has just expanded their Sky Club at LAX and improved the shower facilities, and the soon-to-open bi-level Sky Club at San Francisco will feature two shower suites. If United is serious about improving their United Club offering, then it will take more than updated furniture and edible food to justify price hikes.