Los Angeles. Is it the sun, the glamour? The film industry’s deep pockets? The relative proximity to Asia and Australia? Every airline wants a piece of LAX. Several carriers call Los Angeles airport a hub, with tough competition between the three major alliances, and a significant presence by outsiders—Alaska, Virgin America, and Middle Eastern carriers.

When it comes to United, the picture is fuzzier. The airline operates a powerful hub at San Francisco international airport, a mere 400 miles away. Over the last few years, the Star Alliance member shifted international service out of LAX, down gauged several routes, significantly cut domestic capacity, and quietly settled at a third place amongst domestic carriers.

Ground services suffered, too. In 2014, the combined United/Continental carrier consolidated operations in Terminals 7 and 8—by far the saddest looking facilities at the aging airport—while competitors were in the process of refurbishing their respective terminals. In October of the same year, United shuttered its international First Class lounge, which, while by no means fancy, was their only serviceable club at LAX.

Today, United’s premium passengers at Los Angeles airport have the choice between two drab, over crowded United Clubs, which earned the bottom rankings in our Definitive Guide to the LAX Lounge Scene. In fairness to United, the clubs were meant to be temporary, while the airline embarked on a major refurbishment program across terminals 7 and 8, to the tune of over $570 million. But “temporary” has lasted over two years. 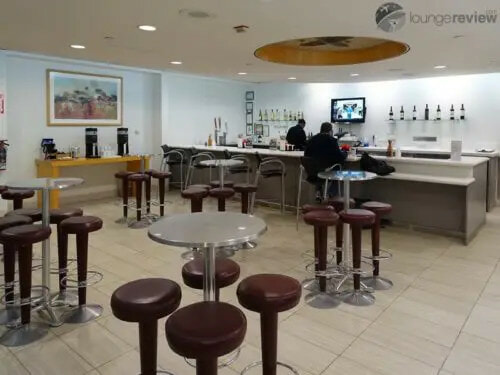 A competitive landscape at LAX

While United has shrunk at LAX, Delta, American Airlines and foreign carriers have expanded their presence over the last few years. They have also benefited from—and contributed to—major terminal renovations which have helped lift sections of the airport from the 60s into the 21st century.

Last year, Delta renovated and expanded their Sky Club in Terminal 5, in order to offer a more substantial food and beverage selection, modernize the seating area, and enhance privacy. The lounge features sweeping views of the tarmac, a quiet room, power outlets at every seat, beautiful shower suites, a comfortable dining area, and a full bar. 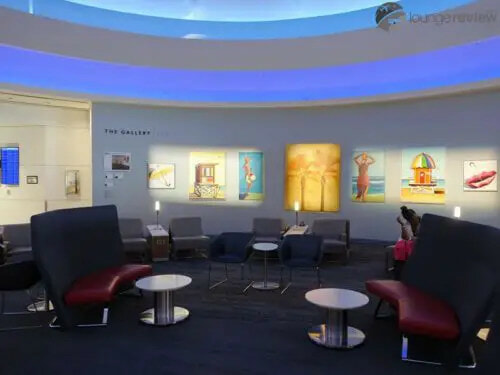 American’s lounges are bit more dated but shine in terms of space and amenities. The carrier operates a huge Admirals Club in Terminal 4, a first class lounge, as well as a smaller, more modern club within the Terminal 4 satellite building. The lounges feature stunning floor to ceiling windows, shower suites, plenty of room to stretch out, and a substantial food and beverage selection in first class. They’re also receiving a facelift—Business and First Class customers will eventually benefit from a full-service restaurant.

Facilities are even more impressive at the Tom Bradley International Terminal, where an array of fancy lounges has sprung with a seemingly endless set of amenities. Emirates and Etihad both operate brand new lounges with an outstanding food and beverage selection and posh, private seating areas. Qantas runs two elegant clubs: a oneworld lounge for business class and elite customers, and a First Class lounge with sit-down restaurant service.

Incidentally, Star Alliance—the alliance in which United participates—has won the most awards with their grandiose Star Alliance Lounge shared amongst member carriers. The club boasts an outdoor terrace with fire pits, a deck overlooking the terminal atrium, a generous buffet, numerous shower suites, and a gorgeous design. The Star Alliance First Class Lounge isn’t too shabby either, with an exquisitely private space, VIP rooms, and cooked-to-order food.

The Star Alliance lounges are so good that we have suggested that United customers make the trek over to the international terminal—a brisk 20+ minute walk, airside—to enjoy the Star Alliance Lounge in lieu of the United Clubs, provided that they have ample time. 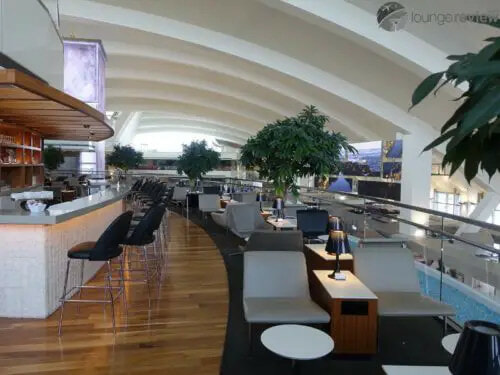 The new United Club at LAX features an outdoor deck

There is light at the end of the tunnel for United passengers.

On December 6th, a new United Club will open by gate 71A, between Terminals 6 and 7. The new facility has been long in the making, and has required substantial structural modifications: the northern portion of Terminal 7 has been widened, two floors have been added, and the new lounge is located on level 4 above the former roof.

The new 20,000 sq.f. United Club will replace the two existing lounges by gate 71A and gate 73, which will close permanently. The spacious club will be one of the airline’s largest system wide, and highlights the carrier’s continued commitment to LAX despite recent cuts. 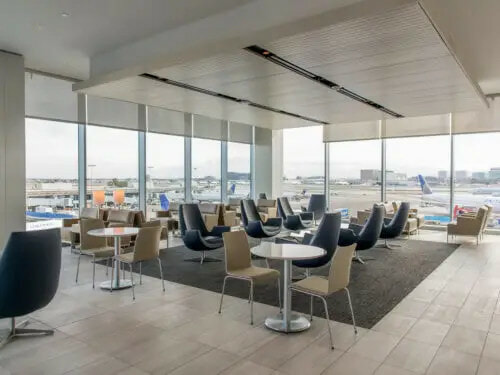 The design of the new club, excellent location, and elevated amenities underscore United’s desire to compete again on ground services at LAX.

The new lounge naturally features the airline’s latest design, which is now widely available system wide—at locations as varied as London Heathrow, San Francisco, San Diego, and Seattle airports. The space is fresh and modern, with white marble, designer light fixtures, and USB and power outlets at every seat and under the bar. Colorful partitions and vintage pictures of United aircraft dot the club, breaking the monotony of an otherwise sleek but somewhat minimalistic ensemble. 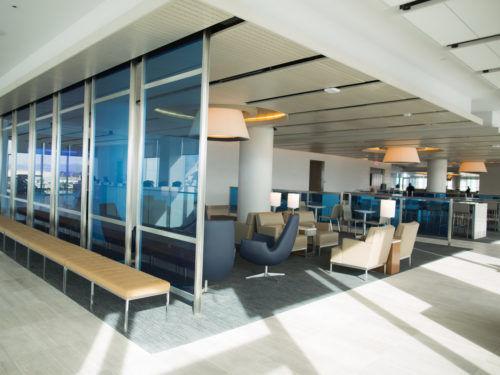 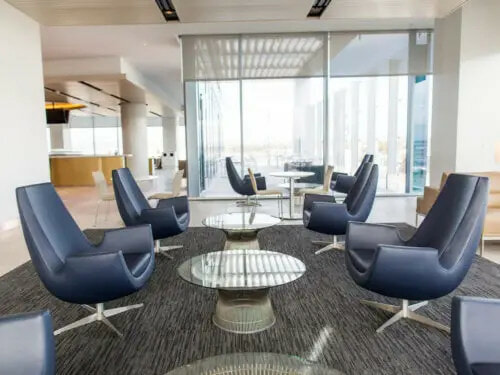 The highlight of the lounge is the outdoor terrace—the second at LAX, perhaps inspired by the Star Alliance Lounge—which boasts views of the tarmac, the Hollywood hills, and the Los Angles skyline in the distance. The deck is furnished with dining tables and promises to be an enjoyable social space, as well as a small slice of heaven for airplane lovers. 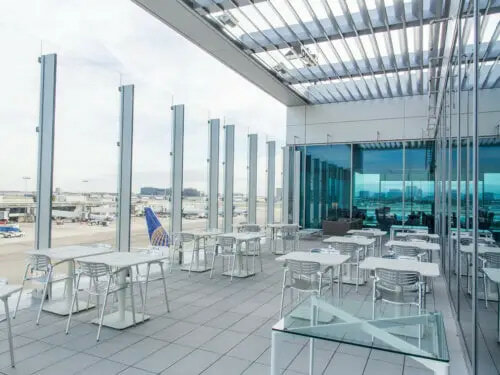 The club also benefits from floor to ceiling windows and thus ample amounts of natural light. 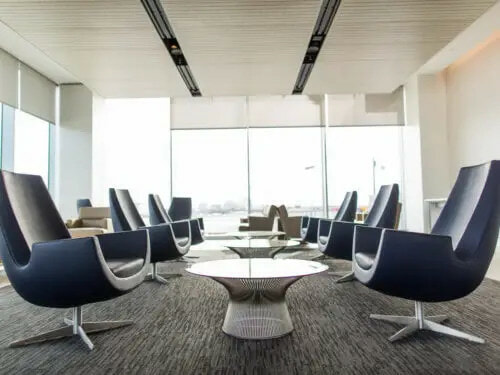 In terms of amenities, United offers a full bar, though as is customary for United Clubs, only house wines, prosecco and well drinks are complimentary. The drink selection also includes complimentary juices, soda, and Illy espresso. 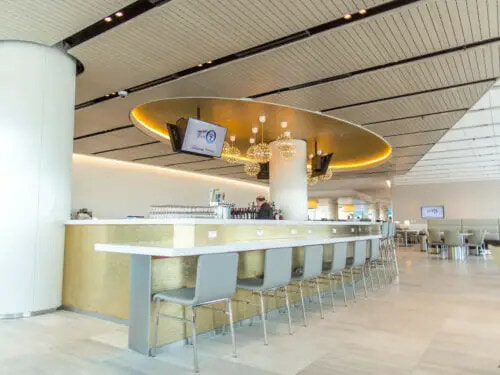 The food selection promises to be a notch ahead of the typical United Club fare. Ingredients will be sourced locally—a first for a United Club—and prepared in an on-site kitchen. The spread is expected to include a variety of salads, cold and hot entrees, and desserts. While that’s a far cry from the offering at the Star Alliance Lounge in the Tom Bradley International Terminal, it puts United in line or ahead of direct competitors: American offers mostly packaged snacks, and while Delta’s food selection will likely rival United’s, it is not freshly prepared.

Unfortunately, the new United Club at LAX doesn’t offer showers. While this is not a surprise—none of the new United Clubs come with showers, except for the London Heathrow location—it is nevertheless an unfortunate oversight, at a lounge which welcomes guests bound to destinations as far as Australia. Eventually, the upcoming Polaris Lounge will fill the gap, but only for premium passengers, excluding Star Alliance Gold members and United Club members, and most likely not before mid-2017.

A complete overhaul of LAX Terminals 7 and 8

The new United Club is only a fraction of United’s investments in Terminals 7 and 8. The airline has also remodeled the ticketing/check-in areas, security checkpoint, and baggage claim area. Many of the enhancements are under the hood: several systems, including the baggage processing facility, have received an upgrade. 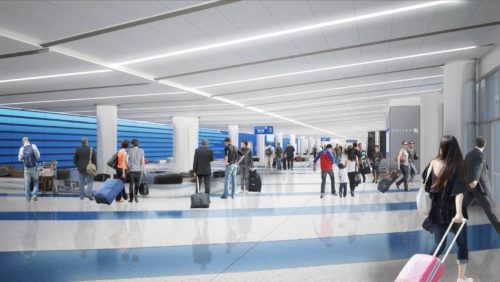 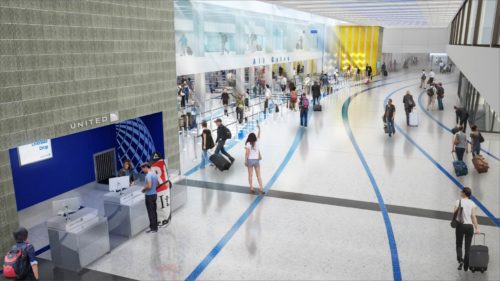 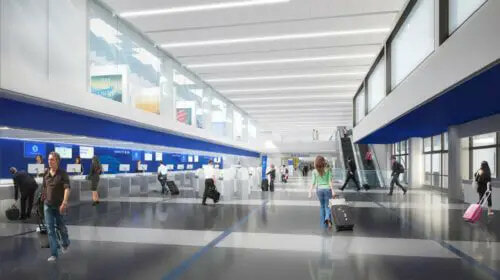 The new United Club at Los Angeles airport Terminal 7 puts United back in the game at LAX. The modern, luminous, and comfortable lounge, with its swanky outdoor deck and substantial food and beverage offering, competes well with American’s and Delta’s clubs, though it’s no match for most lounges operated by foreign airlines, and lacks showers. The club is spacious, but likely to remain busy at peak times. It’s also worth noting that Global First passengers will still not benefit from a dedicated area or amenities, though that was expected since United is slowly phasing out international First Class.

Around mid-2017, United will open a new Polaris Lounge in the space currently occupied by the United Club by gate 73, which, incidentally, used to be a Global First Lounge. The footprint of the club will be significantly expanded in order to meet the requirements of a Polaris Lounge. The new club will welcome exclusively United Polaris business and first class passengers and will offer complimentary full meals, restaurant-style, private work and relaxation spaces, as well as shower suites. The opening of the Polaris Lounge will place United a notch above its most direct competitors, and help decrease traffic at the United Club. 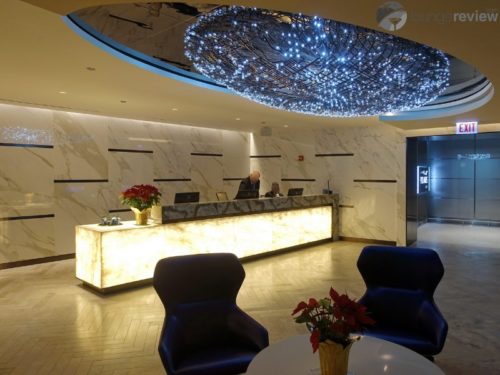 American and Delta are not resting on their laurels, however. American has promised a splendid new lounge for premium passengers, which has the potential—when it finally materializes—to overshadow United’s Polaris Lounge. As for Delta, they’re coordinating a bold move to Terminals 2 and 3, which may happen as early as next year. The move would help Virgin America and Alaska Airlines consolidate operations, but more importantly, greatly facilitate connections with SkyTeam partner flights at the international terminal, whereas United to Star Alliance connections require a healthy hike all the way through Terminals 7, 6, 5, 4, and TBIT. Delta is already planning a new lounge, and if the stunning new Delta Sky Club at Seattle-Tacoma airport is any indication, the Atlanta carrier could set the bar high.

Either way, United passengers traveling through LA should rejoice for the—overdue—upgrade. The new United Club will be open from be open from 4:30 AM to 10:00 PM. We can’t wait for December 6th.