Today, the SkyTeam alliance opened its newest joint lounge, based at Beijing Capital International Airport (PEK). The facility, located in Terminal 2, has 800 square meters of space and seats 160 travelers.

SkyTeam gave the press a tour of the new space as far back as November 2016. Perry Cantarutti, SkyTeam’s CEO and managing director, presided over the preview event in conjunction with the alliance’s governing board meeting. SkyTeam’s first co-branded lounge opened at London Heathrow’s Terminal 4 in October 2009, he said. “It’s our largest facility, set over two floors, and includes a Clarins Spa and a yoga room, where we pioneered SkyTeam’s 15-minute Yoga Program,” he said. “We’ve now got six SkyTeam-branded lounges around the world, more than any other alliance. Our others include Dubai, Hong Kong, Istanbul and Sydney.”

Lounges are popular with SkyTeam customers and allow members at each airport to realize synergies through cost sharing, said Cantarutti. “Lounges are a real win-win for an alliance,” he stated. “They are a big plus for high-value customers who expect quality lounges during their travels. And at the same time lounges add value to airline members by raising their brand and that of the alliance.”

As an example, there are 14 SkyTeam members based at Terminal 4 at London Heathrow Airport, said Cantarutti. “And [having] the lounge means they can share operating costs while offering a quality pre-flight experience to their customers.” 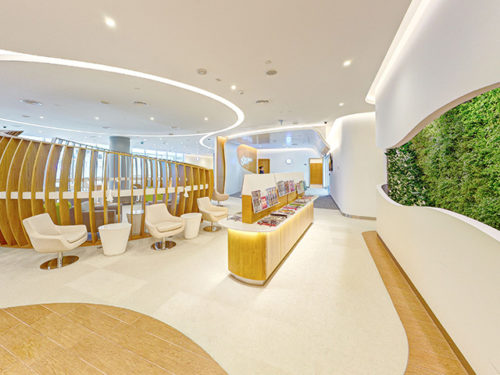 SkyTeam has a global network of 1,062 destinations, said Cantarutti. “We have focused on delivering consistency for customers so that they can expect the same service from SkyTeam wherever they are in the world,” he said. “This is the case for our SkyPriority airport services for top customers and it’s the same for our lounges. We’ve developed a signature style that is instantly recognizable, albeit with local touches that reflect the city the lounge is in.”

In choosing lounge locations, SkyTeam identifies airports where there’s no home carrier, a large number of SkyTeam members and a strong business travel demand, said Cantarutti. “We’re committed to adding value to our members’ businesses and offering an enhanced travel experience to our top customers and lounges are an effective way to do this.”

Beijing Capital was an an ideal choice for a lounge because 12 SkyTeam members operate from that airport, said Cantarutti. “It’s a major hub in greater China and more than 14 million SkyTeam passengers use the airport each year. But there’s no home carrier,” he said. 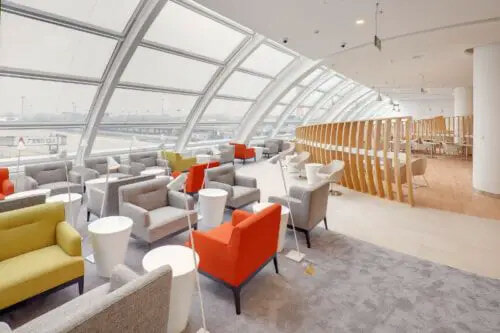 SkyTeam is the leading alliance in greater China and now has two lounges in the region, said Cantarutti. “SkyTeam and its members serving greater China are working together make travel more seamless, particularly when it comes to transfers at our major hubs, and also enjoyable,” he said. “The Beijing and Hong Kong lounges are tangible examples of our commitment to enhancing the service we offer our customers flying to and from greater China.”

The Beijing lounge‘s interior features signature sleek, modern curves, natural accents of wood, along with the iconic ‘living wall,’ featuring different types of plants, said Cantarutti. “The lounge has huge, curved windows that offer panoramic airport views. We’ve made good use of that natural light by employing shades of white, green and natural wood that keep the facility feeling light and airy,” he said. “So often business travelers spend a great deal of time in meetings, in cabs or on a plane. This lounge has been designed to offer them a touch of nature.” 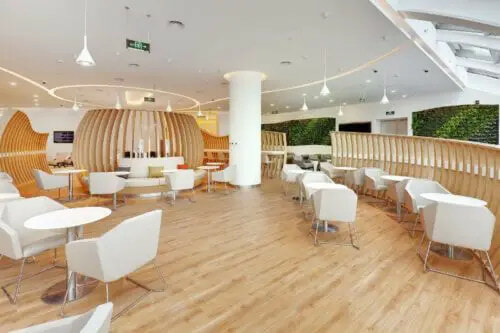 The lounge was constructed in collaboration with SkyTeam by members China Eastern and China Southern. Beijing Aviation Ground Services will manage and operate the facility on behalf of the alliance.

The lounge features a buffet with hot and cold Chinese and international food offered throughout the day, said Cantarutti. “Customers can help themselves to hot drinks, water and sodas, plus premium-label beers and spirits or enjoy a social drink at the wine bar.”

There’s a relaxation area, a VIP room for added privacy, free Wi-Fi, a business area with computers, numerous power sockets and showers, with towels and toiletries for a pre-flight freshen up. 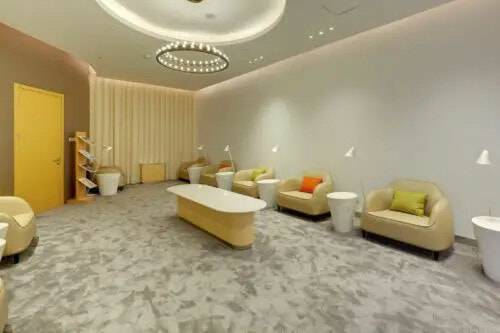 SkyTeam has plans to expand its global lounge portfolio even further, Cantarutti. “They are popular with our customers and add value to our members. We’ve identified several cities where shared lounges make good business sense, so watch this space,” he said. 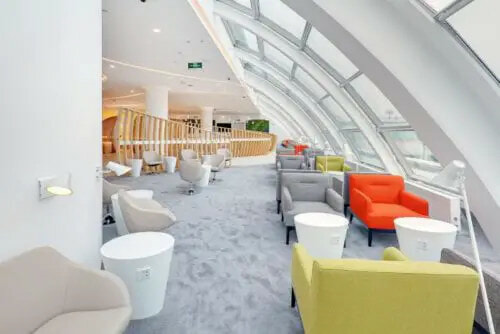 @Marty, the lounge is open. It was merely closed for a few weeks for some kitchen renovations.